GULU – Suspects who were arrested in Arua following the violence that broke out on Monday have told court that they were brutalized and tortured by personnel attached to the Special Forces Command (SFC).

Over 30 suspects including the MP-elect for Arua Municipality, Kassiano Wadri, MPs Gerald Karuhanga and Paul Mwiru were Thursday afternoon arraigned before the Magistrate’s Court in Gulu.

Kassiano Wadri and the others were charged with treason.

But the suspects could not enter plea as the court has no jurisdiction to try suspects charged with a capital offence as serious as treason.

However, Medard Lubega Ssegona, one of the lawyers representing the suspects told court that some of the suspects had been extremely tortured to the extent that they could not walk or sit without support.

“We have a number of clients that were badly beaten and tortured during the process and after arresting them while they were in custody of the soldiers referred to as SFC,” Ssegona said.

Ssegona named a female suspect identified as Night Asala whose internal organs were badly damaged and was bleeding through her private parts.

He also named other suspects Atiku Shaban, Gamba Tumusiime and Abora who were badly beaten, can not stand, and can only sit with extreme difficulty.

“For those I have mentioned, they can not walk by themselves, can not sit because of what we believe to be serious internal bleeding,” Ssegona said.

“The rest of the accused persons were equally beaten by the SFC soldiers and have received some treatment by Police, but it is not sufficient and were advised to do a limb Xray,” he added.

The laywer requested the court to order that the two affected suspects (MPs Gerald Karuhanga and Paul Mwiru) who have been referred for medical examination be availed by prison authorities to access medical treatment.

Ssegona asked that the two MPs be granted access to private medical facilities of their choice and at their cost simply because they can not trust services of the same government that brutalized them. In addition, he requested that regular reports on the suspects’ health be made available.

In his ruling, the Chief Magistrate ordered the prisons authorities to allow the said suspects to get medical examination at facilities of their choice as requested.

The suspects were remanded to Gulu prison until August 30.

Meanwhile, Mityana municipality MP, Francis Zaake who was also arrested on Monday was not present in court. There were reports yesterday that he is bedridden and was also allegedly tortured. 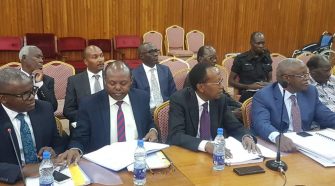