Parliament on Wednesday resolved to hold a thanksgiving prayer service appreciating God for restoring the life of the Speaker of Parliament, Rebecca Kadaga having recovered from illness that saw her admitted at Aga Khan hospital in Nairobi, Kenya for over a month.

The resolution was in a motion passed Wednesday which was moved by Ngora County MP, David Abala and seconded by Dokolo Woman MP, Cecilia Ogwal in a session chaired by Kadaga. This was the first plenary session that Kadaga chaired since her return from her sick leave.

The Speaker returned to the country from Kenya in April after undergoing medical treatment in Nairobi.

She had been airlifted to Kenya for further management days after she was admitted at Nakasero Hospital in Kampala. Parliament said at the time that she was fatigued as she had just returned from a 10-day working visit to Morocco and the U.S.

While moving the motion on Wednesday, Abala noted that legislators are mindful that a threat to the health of those entrusted as watchmen over the country’s democracy is invariably a threat on the very core of the security of democracy.

Abala said it would be unbecoming of members of Parliament not to appreciate the awesome grace of God only which, he said, can account for the recovery of the Speaker to full health within such a short span of time.

“Let it therefore be resolved that this August House collectively do give thanks to the Almighty God for the return to and the health of Hon. Rebecca Alitwala Kadaga and in unison, we all do henceforth commit the wellbeing of the Speaker, the Deputy Speaker, Honourable Members and Staff of Parliament in the Sovereign Hands of the Almighty God,” Abala noted.

He added that, “In compliance with the Biblical command in Luke 17:15 and Philippians 4: 6-7, Parliament will at an appropriate time hold a thanksgiving prayer to give thanks to God for restoring the health of Hon. Rebecca Alitwala Kadaga, the Right Hon. Speaker of this House.”

Reacting to the motion, Cecilia Ogwal advised fellow legislators to always balance between hardwork and taking off time to care for their health.

“Touching the health of the Speaker is like touching the eye of members and the people of Uganda. We thank the legislators and the staff of Parliament for the solidarity expressed during Speaker’s illness moment,” Ogwal said.

“All of us have to reflect on creating a balance between workaholism which is fuelled by the social and political pressure and our health. Once we lose our health, all these important things that are driving us as MPs are done.”

“We should all caution ourselves, it is important to give dedicated service but also reflecting on our individual health doesn’t mean you are compromising on that,” Ogwal added. 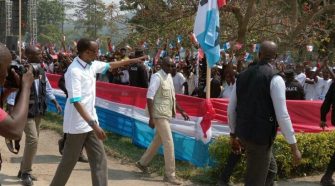 Kagame gives testimony about his journey as a poor student