At least Shs 600m raised from the 2018 MTN Marathon Season will go towards the improvement of maternal health, the telecom giant announced Thursday.

The MTN Foundation has also announced its contribution of an additional Shs 400m to total Shs 1 billion in proceeds, in celebration of 20 year anniversary of MTN in Uganda.

“This is the highest amount ever raised from the 15-year legacy of the MTN Marathon,” MTN Uganda said in a statement.

“We would like to thank all that participated in the MTN Marathon Season that took place in November 2018. This was the first time we took the MTN Marathon beyond Kampala to two more regions. The participation was impressive as Ugandans came together and have raised money for the improvement of maternal health. That is the power of connections,” said Wim Vanhelleputte, the MTN CEO.

MTN Uganda says the marathon proceeds will be shared equally by five regions – Central, North, East, West and South West – with focus on health centres in the region. In another first, each of the partners of the MTN Marathon will be responsible for implementation of a project in a specific region.

Over 30,000 people participated in the marathons including several first timers and elite runners, according to MT

At the main MTN Kampala Marathon, the revised and improved route meant improved times and a better running experience for elite runners, fun runners and marathon enthusiasts. Winners got prizes worth Shs140m.

Speaking at the press briefing, Patrick Mweheire – Stanbic Bank’s Chief Executive said: “We are delighted that the efforts from all partners and the public has raised a significant amount of UGX 1 Billion to improve maternal health in Uganda. Maternal Health is an area that requires the much-needed support and attention especially for women in rural areas who face multiple barriers to accessing critical routine and lifesaving maternal health care”.

“We’re also excited to be a part of the implementation of the projects in the regions and as Stanbic, we look forward to seeing how our efforts will support the maternal health initiatives in Northern Uganda. Stanbic remains a long-term partner in the MTN marathon as we continue to support social investment initiatives that transform lives and communities in Uganda.”

Flavia Nabaasa, the Business Development & Commercialization Director at Coca-Cola Beverages Africa Uganda said the partnership was a classic example of “what we can achieve when we combine private sector expertise and resources to collaborate with government in support of the Sustainable Development Goals”.

“At Coca-Cola, we pride ourselves in creating impactful partnerships which ultimately benefit the communities in which we operate,” Nabaasa said.

In 2018, Coca-Cola through Rwenzori pure Natural Mineral Water contributed Shs 150m towards the marathon both in cash and in kind. 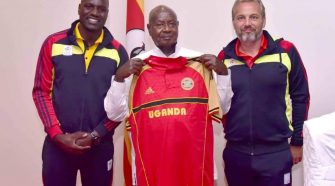