The deportation order for Vanhelleputte, a Belgian national, was signed off by Minister of Internal Affairs, Gen Jejje Odogo on Thursday.

The deportation order states that Wim was deported in accordance with Section 52 (g) of the Uganda Citizenship and Immigration Control Act.

Gen Odongo approved that Wim be deported to Belgium indefinitely.

However, in a statement, the telecom company has confirmed deportation of their CEO, but revealed they are not not yet informed of the reasons for his deportation.

“We are understandably concerned about these developments and are engaging with the authorities to seek understanding that would lead us to resolving this matter,” they add.

They say Kyomukama’s appointment is to ensure business continuity, and that their focus continues to be on delivering the best quality products and services to our customers.

Wim is not the first MTN – Uganda top staff to be deported, last month, security arrested and deported Olivier Prentout (French) who was Chief Marketing Officer and Annie Tabura, a Rwandan national, who has been MTN’s General Manager for Sales and Distribution.

“Security agencies in close coordination with immigration officials have been investigating two foreign nationals working with a leading mobile telecom company over their engagement in acts which compromise national security,” Police said in a statement.

Days later, Elza Muzzolini, 34, an Italian national, who was the General Manager Mobile Financial Services at MTN Uganda, was also deported from Uganda.

MTN Uganda however, said it is “fully committed to respecting and operating within the laws of the country.”

But, in regard to Wim’s deportation, a reliable source close to investigations told SoftPower News that Wim used the virtual space to maintain communication with individuals who were deported and he has admitted to doing so.

A senior security official close to investigations into infiltration and attempts to compromise Ugandan security by a foreign neighbouring government told SoftPower News: “How dare Wim maintain communication with deported individuals who were involved in subversive acts well aware that he is under investigation?”

The source said the MTN boss’ actions obstructed investigations in matters concerning national security as he intimidated staff and coached others. 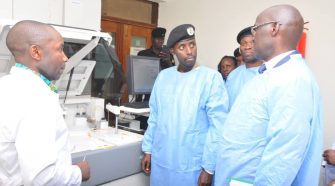