Elza Muzzolini, 34, an Italian national was deported on Tuesday. She becomes the third Senior Manager at the telecom giant to be deported in this week in what security agencies say is a move to avert further compromising of national security.

On Monday, security arrested and deported Olivier Prentout (French) who was Chief Marketing Officer and Annie Tabura, a Rwandan national, who has been MTN’s General Manager for Sales and Distribution.

A statement by Police said the two were working for “with a leading mobile telecom company” but did not disclose which one.

Later on Tuesday, Police summoned the MTN Uganda chief executive, Wim Vanhelleputte and Anthony Katamba who is MTN’s Chief Legal Counsel to explain the alleged actions of the Senior Managers of the telcom company in activities considered subversive to Uganda.

Security agencies are yet to officially reveal details regarding the said actions of the ex-staffers.

This news website has exclusively reported that one of the MTN Uganda staffers facing allegations, Annie Tabura had used her influence in the company to establish a wide and discreet network of Mobile Money channels through which subversive (mostly criminal) operations would be financed. The scattered network was intended to make the detection of such transactions difficult to detect.

The mobile money network, the source said, was strategically positioned in areas of interest to Rwanda – refugee settlements where Rwandan refugees are situated to aid their kidnapping back to Rwanda, as well as urban areas. In the urban areas like Kampala for example, the motive was to execute sponsored criminality including assassinations of high profile politicians and security officers. Minister Philemon Mateke has been cited by credible security sources as one of those targeted.

It could be this reason that Elza Muzzolini has been implicated too, since Mobile Money transactions were under her supervision.

It is also alleged that Annie Tabura took MTN distributorship worth billions of money from Ugandans who could not be compromised to another who is a known Kigali agent. 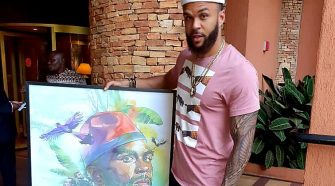 Rapper Jidenna Will Collaborate with Ugandan Painter, Kwizera, Thanks to a Beautiful Portrait