Just hours to casting of votes in the presidential elections in Zimbabwe, former President, Robert Gabriel Mugabe, has said he will not vote for his successor and current President, Mr Emmerson Mnangagwa of the ruling ZANU PF.

Dressed in a black suit with a maroon tie, Mr Mugabe told journalists who had gathered at his blue roof mansion in Harare on Sunday afternoon, that the current ZANU PF leadership tormented him and is continuing to do so, pointing at a possibility of voting for young politician, Nelson Chamisa of the opposition Movement for Democratic Change(MDC).

“I cannot vote for those who tormented me. I can’t vote for ZANU-PF. What is left? I think it is just Chamisa,” Mr Mugabe said.

Mugabe, 94, until his overthrow by the military in November last year, ruled Zimbabwe for nearly 37 years. He was replaced by his former ally and vice president Emmerson Mnangagwa, who now holds the ZANU PF flag.

Mr Mugabe further dismissed media claims that he has been funding Mr Chamisa’s campaigns against the ruling party.

On whether he harboured intentions of his wife Grace Mugabe succeeding him as President, Mr Mugabe described the allegations as “utter nonsense”.

Asked whether he stayed long in power at the mercy and support of the Zimbabwean military forces, Mugabe said the country always held regular free and fair elections which he won.

“It was not the army which ensured my stay in power. We had elections every 5 years. I was defeated at one time by Tsvangirai but he did not get enough votes to get an outright win,” he said.

Mugabe was however sceptical on whether tomorrow’s election will result into constitutional rule which he says is long gone.

“This is what l regard as the greatest event that should happen, will reform, will thrust away military form of government and bring us back to constitutionality. We must have a democratic constitution because that is what we fought for,” he said.

He added that: “We had that freedom after 1980. The peoples freedom to speak, organise themselves as they liked and to go about freely in their country, but, they are now terribly frightened because they don’t know what will befall them”.

This is the first election in 37 years without Mr Mugabe’s name on the ballot form with campaigns having been generally peaceful as well as international observers monitoring the developments for the first time in 16 years.

The contest is between Mr Mnangagwa, 75, of the ruling ZANU PF and young politician and pastor, Mr Nelson Chamisa, 40, of the opposition MDC party.

23 Zimbabweans are vying for the top seat but research organisation, Afro Barometer conducted a survey recently and put Mr Mnangagwa in the lead with 40% followed by Mr Chamisa with 37%. 20% of the people were undecided.

The results of the presidential elections are due by August 4. A run-off is expected on September 8 if no presidential candidate wins at least 50 percent in the first round. 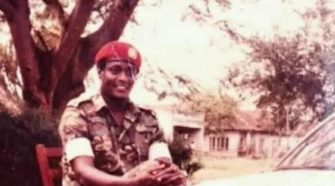