After months of throwing hints on a possible separation with the FDC and speculation from the media, Gen (Rtd) Mugisha Muntu has quit the Forum for Democratic Change (FDC).

His announcement follows months of consultations held across the country with members of the FDC which began after he lost the party Presidency to Patrick Amuriat.

On Tuesday, Muntu met with some of the members of the strongest opposition party led by Amuriat to make his findings from the consultations known.

“Following our nationwide consultations that were carried out between January 15 And July 7, I today held a meeting with the Party President of the FDC, Hon Patrick Oboi Amuriat to discuss our findings and resolutions,” he mentioned in a statement released on Tuesday which sources close to Muntu say is authentic.

When he started the consultations in January, Gen Muntu had said that he would reveal his decision regarding whether or not he was leaving the party, once they (consultations) were complete.

Among the outstanding issues that came up during his nationwide meetings was the weakening position of FDC as a result of internal wrangles and divisions, which was of concern to many grassroot members.

Owing to these concerns, Muntu repeatedly advocated for building networks and alliances that will enable actors in the opposition (regardless of political party) to work with like-minded people on agreed issues.

Muntu also cautiously presented two alternatives that seemed to point to his eventual decision – working within one big party or as an alliance of several like-minded players with different approaches towards the same goal.

“I hereby would like to inform the country of our decision to leave the FDC with immediate effect. We will be holding a press conference on Thursday 27 of September 2018 to discuss this,” his statement reads in part.

When reports about his intention to quit FDC first emerged, Muntu dismissed them saying that split within the opposition would not bring forth new dynamics since all actors are products of Uganda’s culture as a country.

“A national culture where many of us who are politicians, say one thing and do a different thing,” he told a press conference in January this year.

At the time, he insisted the party must focus its efforts on building a new culture where its leadership acts consistently to what they talk about. He also pointed out incoherence and mistrust that had eaten up the FDC.

During the campaigns for FDC Presidency last year, Muntu hinted on the sticky issue of the lack of trust in him by a section of FDC. Some in fact discredited him during the same elections by labeling him a “mole”.

Muntu, 60, who joined Reform Agenda (which later became FDC) about 13 years ago has for long been opposed to the ideology of defiance as championed by FDC strongman Dr. Kizza Besigye. Instead, Muntu has branded himself as one who approaches issues with sober mindedness, while placing emphasis on the strength of the party structures up to the grass root level.

Many observers have often opined that Muntu was an outsider within the FDC given his character that is contrary to radical extremism that most of the FDC leaders including Besigye have known to espouse.

It remains to be seen whether Muntu, a former army commander of the UPDF will opt to form a new political party that will push forward his ideology. He advances the slogan ‘Country Before Self’. 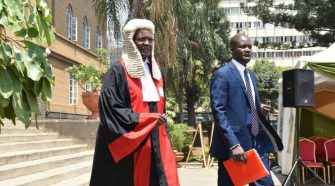