Each of the one-hour long films was created in Kenya and will be showing on Pearl Magic (Channel 161), the dedicated channel that shows Ugandan content.

Joan Semanda, the PR and Communications Manager of MultiChoice Uganda said that the premiere of the two projects is in line with the efforts by the digital pay TV giant to support film making in Uganda. Semanda added that Friday’s premiere was also an opportunity to bring together the Ugandan MTF alumni as well as the current students to share experiences.

“What we have done here today is we have brought our alumni and our incoming students together for the first time. And we have seen them chat and exchange experiences to let each other know of the expectations,” she said.

She encouraged the Ugandan students who will be joining the academy early October to work towards outmatching the god performance exhibited by their predecessors.

“I just want to encourage our participants that we’ve had our Ugandans doing really well in the MTF academy for 2018/19. That gives you some really good shoes to fill and we expect really good things for you and we can’t wait to see what happens as you go into the house”.

‘Promises’ is set in Kenya and tells a story of a man who becomes a single father after his wife dies while giving birth to their second child. The makers of the short film who attended the premiere said the story seeks to open the viewers’ eyes to the challenges that single fathers encounter.

Mwangi disregards pleas by his pregnant wife, Pendo, not to go hang out with his colleagues. Little does he know that would be the last time he would be seeing her. Mwangi’s social outing is cut short by a phone call about an emergency. Pendo had been rushed to the hospital but only her baby made it alive.

The film which is produced in Kiswahili but dubbed in English captures the huddles – low income, parenting, trauma – that Mwangi who rides a boda boda must overcome to raise his kids.

The screening also prompted a debate on the trends of Ugandan films with some participants including renowned actor Philip Luswata arguing the mentality that only melancholy can sell local films needs to change.

“Ugandans are a people that love to be entertained. All over Kampala, there are many comedy themed nights that are mushrooming. That’s because Ugandans like to laugh. We need more bright stories than melancholy,” he said.

Many who reacted to the two films also proposed that MultiChoice together with the filmmakers consider serializing the films as they make powerful scripts. 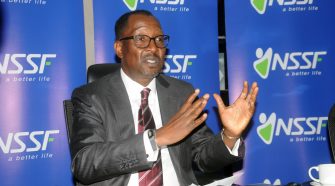