The appeal was made to the Kawempe South MP, Mubarak Munyagwa who was towards the end of last year named by FDC President, Patrick  Amuriat to head COSASE.

Katuntu made the remarks on Monday while handing over office to the in-coming COSASE Chairperson, an event that was witnessed by Rubaga North MP, Moses Kasibante.

Katuntu said that what helped him to register achievements as a committee chairperson for the last two and a half years, is the spirit of team that he build with members.

“You will meet a challenge of quorum because the first half of Parliament, members have time but during the second half, members don’t have the time. But you must keep on encouraging and reminding members to always come and attend the meeting,” Katuntu added.

In highlighting the  achievements registered by his team, the Bugweli legislator revealed that within the limited period, the committee has produced 14 reports including audit on UNRA, OWC, the special audit on Oil Handshake as well as the recent special audit on Bank of Uganda into the sale of seven defunct commercial banks.

Katuntu as well appealed to the general public to embrace and accept Munyangwa as a unique person and avoid comparing him with his predecessor (Katuntu).

“One thing you must realize is that Mubaraka is not Abdu, he has his own way of doing his job and appreciated as such. I also have my own way and I was appreciated,” Katuntu noted.

Speaking during the event, Munyagwa vowed to serve Ugandans with all his ability and in the interest of the country.

“I am replacing a very great personality; Hon. Katuntu is one of the most brilliant lawyers in town. You who are trying to compare me with him are doing a mistake because the shoes I am supposed to fit in are too big and there is no doubt,” Munyagwa acknowledged.

“All I ask is that the public understands that we are different people and let them judge me as Munyagwa; we shall however do our work judiciously without favoring anybody basing all our services on teamwork,” Munyagwa said.

He appreciated Katuntu for his service to Ugandans and promised to always work closely with him always seeking advice from him. 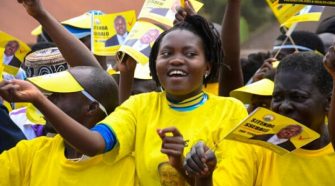