President Yoweri Museveni who is currently in Ethiopia to attend the 30th African Union Summit has called for concerted efforts in combating terrorism in Africa.

Museveni was addressing the Peace and Security Council Meeting of the AU on the subject, on the sidelines of the ongoing AU Heads of State Summit in Addis Ababa, Ethiopia.

The President whose presentation focused on addressing the causes of terrorism, stressed the need for Africa as a whole to make joint interventions especially in dealing with the issue of ideological disorientation which results into skewed politics and distabilizes security.

He said that “terrorists get radicalized with ideas of identity through religion and sometimes tribe” and that “wrong ideology leads to wrong politics which in turn causes insecurity and terrorism”.

In the same light, Museveni pointed out Africa’s technical capacity in fighting terrorism noting that countries must begin to share intelligence but also acquire the required equipment to counter terrorism.

Since terrorists often manifest themselves through attacks on innocent civilians, Museveni also called for strategies through which ‘soft targets’ can be protected.

Uganda through its army, UPDF has been significant in promoting regional security and in several other unstable countries on the continent.

Over the years, the UPDF has been deployed in different peacekeeping missions including Liberia, Somalia, DRC, South Sudan and Central African Republic where acts of terrorism have manifested themselves profoundly. 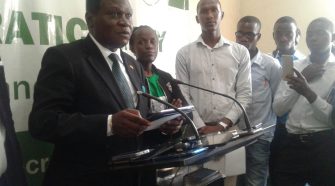