President Yoweri Museveni has blamed African countries for failing to protect Libya from foreign attack, saying Africa had the potential (even militarily) to resist the assault by Western powers.

Gaddafi’s killing followed the 2011 Arab Spring characterized by protests against widespread corruption and unemployment broke out in eastern Libya.

The situation descended into civil war, in which NATO intervened militarily on the side of the anti-Gaddafist National Transitional Council (NTC).

The government was overthrown, and Gaddafi retreated to Sirte, only to be captured and killed by NTC militants.

While speaking to the BBC in London this week, Uganda’s President Museveni said African countries should not have allowed the attack on Libya to happen.

Museveni said Africa could have intervened and “taught these people [foreign powers under NATO] a lesson”.

“Libya was an African country being attacked by foreign powers,” he said.

Museveni also criticized the high-stakes summit in Berlin, Germany last Sunday to discuss the way forward to end the conflict in Libya.

Leaders and officials from Turkey, Russia, Egypt, France, Italy, the United Kingdom and the United States attended the gathering, while representatives from the UAE, Algeria, China, the Republic of the Congo, the United Nations, European Union and African Union were also present

According to Museveni, the summit sidelined Africa which to him was wrong.

“Even now, this [summit] is a failure. Who are these people to come and discuss about Libya? I’m told even Africans was not invited. The President of Congo was invited on last minute. Tokenism. To show that they were involved,” he told BBC.

Asked whether the African Union is not to blame for the crisis that Libya has descended into since Gaddafi’s fall, Museveni said the AU had the capacity to fight back.

“It is a question of coordination. In 1963,, when AU was formed, only 36 countries were independent that means other 20 were still under colonialism,” said Museveni.

“When it was formed, it took a stand – the leaders said all Africa should be free, peacefully, and if not, they would fight. And people thought Africa was joking. But they [Africa] orchestrated the fight against Portuguese and the Boers. And by 1974, the Portuguese empire was down”.

He said the attack on Libya was a surprise and African nations were scattered and not prepared.

“It was a surprise attack. Even me, i didn’t believe anybody would be stupid to attack an African country in that way. We were not prepared and we have not had time. We are scattered”.

“But the potential is there, if Africa wants to chase the invaders, we can chase them.”

Although Museveni admits that Gaddafi had his misdeeds that prompted aggression against Libya, he said there were other ways of dealing with him.

He cited the two times – in 1972 and 1979 – when Uganda fought Gaddafi for supporting Idi Amin and defeated him.

“We had a way we were handling Gaddafi. Then these people that these people came in and created too much chaos”.

Currently, Libya remains unstable. Despite the appointment of a UN-supported government, the rebels under the command of General Khalifa Hiftar have continued to engage government forces and lay strongholds on crucial territories in the country.

The country is currently governed by feuding authorities, with the LNA in the east, and the UN-backed Government of National Accord (GNA) in Tripoli in the west, with each relying on different militias. 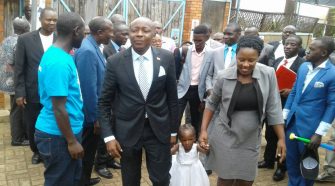