The President announced this in a tweet on Sunday afternoon. He also announced that he has appointed Dr Michael Atingi-Ego as the new Deputy Governor, Bank of Uganda succeeding Dr Louis Kasekende whose contract ended in January.

“By virtue of the powers granted to me by the Constitution, I have appointed Mr John Musinguzi Rujoki as the new Commissioner General of URA. This appointment takes immediate effect,” Museveni wrote on Twitter.

John Rujoki, holds a Master’s degree in Computing and Information systems of the University of Greenwich and a Bachelor of Science in Mathematics of Makerere University.

Prior to his appointment as the URA CG, he was the Senior Presidential Advisor on ICT and Investment.

He was previously employed by the Special Revenue Police Services (SRPS) under the Gen Kale Kayihura’s tenure.

Doris Akol has been at the helm of the tax body since 2014 having replaced Allen Kagina who retired after two consecutive five-year terms.

Prior to that (2012 until 2014), Doris Akol was the Commissioner for Legal Affairs and Board Matters at the Uganda Revenue Authority. In that capacity, she also served as the Company’s Legal Secretary.

President Museveni has on several occasions expressed his reservations in regards to how URA has been doing its business, especially on bureaucracy and tax leakages.

Museveni has often stressed the role of URA as a facilitator of business and investment, cautioning URA workers who frustrate businesses through red tape and bureaucracy.

“Your work is to facilitate business and investment. Never waste the time of business people, telling them to go and come back. You have no right. They are not begging you for anything. These are people adding to the national wealth. For you, you’re not adding anything,” he told URA staff in January 2019 during the commissioning of the URA tower.

“This is our survival, this is to get jobs for our children, this is to get out of dependency. This is the war you are engaged in, and if you are not ready to help, go and do other things”.

At the same event, he made reference to a Commissioner of URA whom he was compelled to sack after learning that he (Commissioner) had been tossing around Chinese investors who had been seeking a licence to engage in brick making using steel and fertilizer by-products.

Museveni said that at the inception of URA, there were critical problems of integrity and that was his priority area.

The President has previously called for the adoption of scientific measures aimed at supporting tax compliance as revenue collection is central to Uganda’s economic independence and national sovereignty.

He also proposed that URA considers electronic monitoring of telephone calls made through telecom companies so as to address the problem of under-declaration of telephone calls, which he has previously expressed concern about. 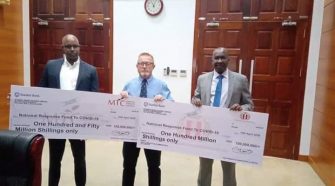