Three weeks after it was enacted, President Museveni has assented to the Administration of the Judiciary Bill.

The Bill seeks to operationalize articles in the constitution that deal with the Judiciary as an independent arm of government and create guidelines and reference for a legal and justice system by spelling out jurisdiction divisions, conditions for trials, sentencing and court fees.

The same law provides for the continued monthly payment of salary to a retired Chief Justice and Deputy Chief Justice. It was assented to on Friday, June 19, 2020, the same day the Chief Justice Bart Katureebe retired from active service upon clocking the mandatory retirement age of retirement of 75.

This implies that even in retirement, he will continue earning a monthly salary equivalent to that of a sitting Chief Justice, on top of a lump sum package equivalent to 2.4 percent of his annual salary multiplied by five and his years in service. The outgoing Chief Justice Bart Katureebe was earning 20.6 million Shillings prior to his retirement while his Deputy Alfonse Owiny Dollo earns 19.5 million Shillings per month.

Through the provisions of the same law, retired Judges of the Supreme Court, the Court of Appeal, the Principal Judge, Judges of the High Court will continue getting 80 percent of their salaries once they have clocked their respective mandatory age of retirement. They will also get a lump-sum retirement benefit equivalent to 2.4 percent of their annual salary multiplied by five and their years of service, security by the state, chauffeur driven cars, annual medical and housing allowances.

Only the Registrars and the Magistrates are not entitled to security, cars, medical and housing allowances although they will continue earning a monthly salary for life.

The same law establishes a 16-member council chaired by the Chief Justice to determine what they need every financial year and present it to be charged from the Consolidated Fund. Previously, the Judiciary budget was determined by the Ministry of Finance like any other ministry despite it being an arm of government.

Earlier, Justice and Constitutional Affairs Minister Prof Ephraim Kamuntu said that the payments to judicial officers during retirement are to ensure that the active officers serve with diligence and confidence not to be compromised.

The Attorney General William Byaruhanga also endorsed the continued payment for judges saying that the judicial officers retire when they are too old to look for other employment to meet their needs yet the kind of life that they lead makes them prone to lifestyle diseases. He says that with the good package, they will be assured of a decent life after retirement. 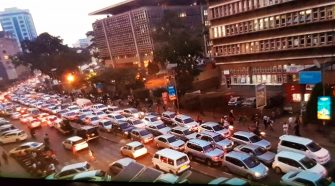