Uganda’s President, Yoweri Museveni has bestowed on his Zimbabwean counterpart, President Emmerson Mnangagwa, the Most Excellent Honor of the Pearl of Africa – The Grand Master.

President Mnangagwa received the Award on Wednesday during the celebrations to mark 57 years since Uganda attained its Independence. The celebrations were held in the Eastern Ugandan district of Sironko.

Mnangagwa was invited by Museveni to attend the celebrations as chief guest.

As is the custom on Independence Day, the President recognizes different individuals for their contribution and service, by awarding them medals as provided for in the National Honors and Awards Act 2001.

In the citation, General Ivan Koreta described Mnangagwa as having been born in a family of politically active farmers. His family was forced by the colonial regime to relocate to Zambia in 1955. He became active in the national liberation politics under the United National Independence Party youth league of Zambia in 1990.

“In 1962, he was sent to Tanzania and Egypt to train as a freedom fighter for the liberation of Zimbabwe. He was among the first crop of the liberation war cadres to open Bagamoyo, a camp in Tanzania which housed cadres from different liberation movements from Southern Africa,” Gen Koreta read in the citation.

“He (Mnangagwa) was also trained in Naijing Military Academy in China in 1963 and to this day, he is an Honorary officer of the Chinese People’s Liberation Army”.

“His Excellency Dr Emmerson Mnangagwa is a visionary, pragmatist, Pan-Africanist, peace maker and unifier who is committed to improving the quality of lives of the people of Zimbabwe. His history is characterized by selfless dedication and sacrificial service to his country”.

President Mnangagwa was later decorated by his host, President Museveni.

Speaking upon receiving the Award, President Mnangagwa said; “I feel extremely humbled by the honor you have bestowed not on me but to my country. I represent my country”.

“This is in respect of the journey that we have traveled as a people, as a country, to where we are today. Committed to develop our country, to integrate with the rest of the region and the African continent,” the President added.

“Uganda has today on the 57th anniversary of your Independence and freedom given recognition to Zimbabwe. I humbly accept on behalf of my country. I thank you”.

The Zimbabwean leader served over 10 years in prison and in 1973 was released and subsequently deported from the then Southern Rhodesia to Zambia. He reunited with the external wing in Zambia before proceeding to Mozambique.

He would then be appointed Special Assistant to the Party President (late Robert Mugabe) and also served as Head of both Military and Civil Intelligence and a member of the Central Committee.

Upon attainment of Zimbabwe’s independence in 1980, Mnangagwa occupied several positions including Minister of Security, Minister of Justice, Legal and Parliamentary Affairs, Speaker of Parliament. In December 2014, he was elevated to position of Vice President of Zimbabwe and in November 2017 took over as President. 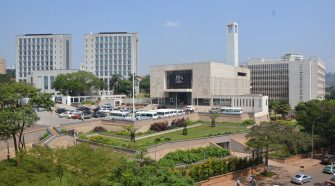