President Yoweri Museveni has described musician and Presidential hopeful, Robert Kyagulanyi (Bobi Wine) as “an enemy of progress in Uganda” who has discouraged foreign investors from investing in Uganda.

The President said this while talking to the BBC on Friday morning.

Museveni had been asked by the BBC’s Alan Kasuja about the continued blocking of the musician’s music concerts by Police.

“Mr Bobi Wine went to America and said that people should not come and invest in Uganda, that is what he said. That means, he is an enemy of progress in Uganda. I was in opposition myself. In the 1960s, I was a member of DP but I could not say don’t build the Masaka-Kabale road because I am not in the government. I couldn’t say that because that road is my road not for the government,” explained the President.

“Why then do you at the same time want to come and take advantage of that prosperity?” asked the President.

Bobi Wine has already declared his intentions to run against President Museveni in the general elections come 2021.

On Uganda’s security threat at the moment, the President said there is no threat Uganda can not handle.

He further said the huge number of the unemployed young people in the country is not an internal threat to the country but rather an opportunity.

“It is not a threat, it is an opportunity. The jobs are there and they will be there. If you look at agriculture, big potential. We were struggling with the basics, electricity, we now have enough electricity and we are building more and more,” President Museveni said.

He reiterated that one of the problems is that people are looking for white collar jobs yet they can engage in commercial agriculture, factories and hotels.

“You can see how many people are already employed in the transport sector, then ICT. These are the four sectors and we are deliberately working upon each one of them to create jobs for our people. The youth are not a problem, they are actually an opportunity,” he added 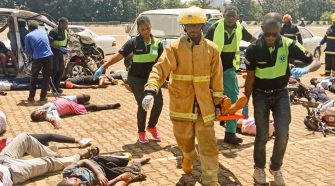