While addressing the nation on Tuesday, April 28, the President expressed concern over Shs 20 Million that Members of Parliament recently allocated themselves off the supplementary budget meant to fight Covid-19. He said it was not right for MPs to take the money and use it for personal activities especially at a time when the country is fighting the coronavirus pandemic.

The President revealed that he had met Speaker, Rebecca Kadaga and told her that legislators had got themselves into the trap. As such, he advised the Speaker that MPs take the money to their respective District Task Force so as to limit the damage caused by the impression in the public that they took it for their personal use.

Without directly pointing out the President or his name, Kadaga at a press conference, would later furiously threaten to take action against the Executive and Judiciary which she described as trying to

This news website has come across a letter the President wrote to the Speaker regarding the matter on April 28.

“I am writing to you in the matter of the Shs20 million which parliament diverted from the government plan to another purpose,” the president writes,” writes Museveni.

In the letter,  Museveni points out illegalities and cautions against Parliament’s shuffling of government’s priorities.

“First of all, this is unconstitutional… It cannot be correct that the Head of Government, the President through the Ministries responsible submits a plan for expenditure to Parliament and, then, Parliament reshuffles the priorities and creates its own against the plan of the President.”

While it’s okay for parliament to approve or disapprove the decision of the government he leads, Museveni says, this should be after a discussion so there is room for logical engagement.

“… for parliament to unilaterally reshuffle the priorities of the government, it means that there is no need to have the president and the executive branch of government,” reads the letter.

“The parliament will have become both the executive and the legislature.”

Museveni cautions Kadaga not to let the same “happen again”.

“Indeed I have discussed with you this matter a number of times,” he writes.

The decision to allocate themselves funds sparked anger, with the public castigating MPs as selfish and greedy.

Members of the public appealed to President Museveni to reign in on Parliament and stop MPs placing of public resources to personal use amid the COVID-19 crisis.

Earlier, Speaker Kadaga said the Shs 20m wired to MPs’ individual accounts was to fuel their ambulances. However, the PS of the Ministry of Health – Dr. Diana Atwine – had in a much earlier communication to the clerk of Parliament said that the ambulances would be stationed at districts and they would be fuelled from the National Budget to the Covid-19 response.

Kadaga barred MPs from discussing the money among the media and ordered that the matter be left to her and the Parliament Commission.

In the following days, her reasons for allocating shs 20m to individual MPs shifted from fuelling ambulances to replicating roles of government structures such as procurement of food to stating that appropriation of budgets is the sole function of Parliament and nobody, not the executive or judiciary,

A number of MPs disassociated themselves from the act and returned the money which they said was wired to them without their knowledge.

On April 29, the civil division of High Court directed MPs to either return the funds to the Parliamentary Commission or transfer it to the accounts of COVID-19 task forces at district level.

Despite the directive by Michael Elubu, the high court judge, Kadaga maintained her stance, rallying lawmakers to follow her instructions and spend the money, citing the constitution.

Kadaga would later state that she had met President Museveni and the PM and that they had advised that the money should not be spent on any other thing apart from the national response to Covid-19.

Media carried reports saying the President had advised Kadaga that deducting money from the national budget and wiring it to MPs was illegal.

It has now emerged, that when Kadaga decided to meet the President over the matter, Parliament had already wired the money to MPs.

“… by the time you came to see me with the… prime minister, we were told that the money had already been sent to the MPs’ accounts,” says Museveni.

“How could that happen? Isn’t a supplementary expenditure part of the Finance Bill? Isn’t the president supposed to, first, assent or otherwise, to that bill before it becomes law? Who, then, authorised the expenditure according to a Bill that had not become law? Is that not illegal?”
Museveni says he told the speaker to get NRM MPs as well well-meaning others, out of the trap they had flung themselves into because they had created an image of trying to benefit personally from a national crisis.

“I told you to, please, get our MPs out of that cul de sac by each MP taking the money to the District Chief Administrative Officer in the presence of the District Task Force,” he writes.

“In that case, the problem would only have remained between the executive and parliament of reshuffling the priorities of the executive without consultation.”

Museveni, who expresses concern about MPs distributing food, asks: “Are MPs the purchasing officer of the State of Uganda?”

In the letter, which was copied to the IGP, Vice President, prime minister, finance minister, Chief of Defence Forces, Attorney General and the Minister of health — President Museveni requests the Auditor General to audit “this aspect, where the MPs became the purchasing officer of the state and see whether their efforts were legal.”

He says audit should be concluded in four weeks so that “we do not have to wait indefinitely.” 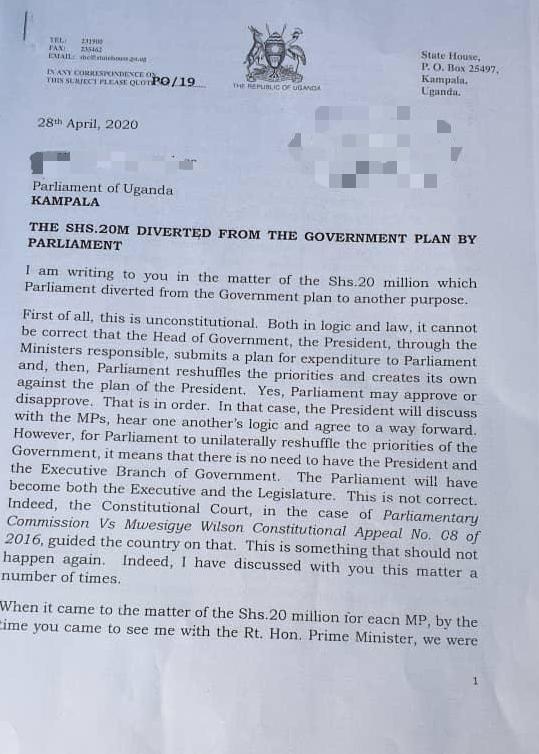 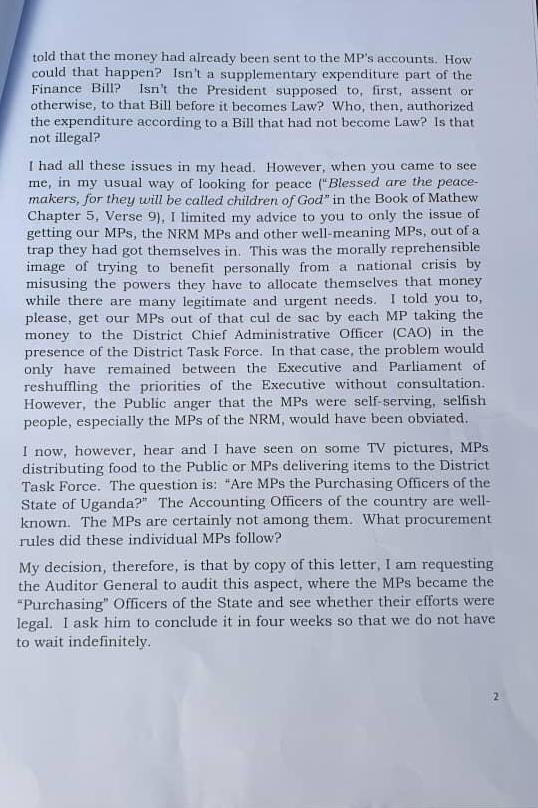 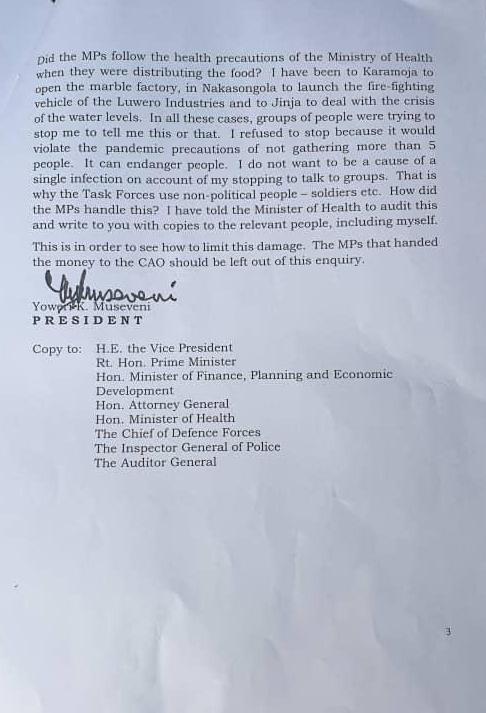 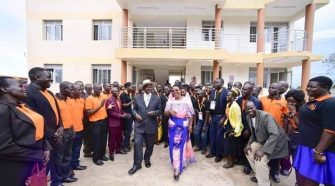