President Yoweri Museveni has broken silence on the contentious debate in the country regarding the newly imposed levies clarifying that depositing money on one’s Mobile Money account does not attract any levy.

He also stated that the levy placed on other Mobile Money transactions; sending to another number and withdrawing is 0.5% and not 1% as had been publicized.

“The 1% was a miscommunication. The actual figure was 0.5%, half of one percent. That is what we should debate, on the mobile money,” the President revealed in his statement.

In a statement issued by the President through his Facebook page, he announced that “there is no tax on mere depositing money on a mobile phone account”.

“That confusion should be clarified. The half percent tax, not 1 percent, is only on the sender and the receiver of money through mobile money,” the President.

The change in the new but largely unpopular policy was first revealed yesterday by State Minister for Planning, David Bahati. He said that Cabinet had Monday discusses the error on Mobile Money deposit tax and directed URA to correct it.

But even during the briefing to journalists, the Minister who given his docket (Finance) would ideally be authoritative and well versed with position of government, still maintained that the tax on Mobile Money was 1%.

It is unclear where the so-called miscommunication on the fabricated deposit tax and inflated levy (1% not 0.5%) for sending and withdrawing emanated.

Also unexplained is what will happen to the numerous Ugandans who have already lost money in payments of the 1% on deposits and the extra 0.5% on mobile money transactions since Sunday when the new tax measures were effected.

Museveni says that unlike social media, Mobile money transfer, “is a useful service” but that it isn’t too much for the informal sector which is never taxed to mane “a modest contribution” to the development of the country.

In justifying the new taxes on accessing social media and making money transfers on mobile money, the President said Uganda is not mobilizing enough revenue domestically, largest because citizens do not want to pay tax.

The balance, Museveni says is handled by borrowing Shs 8.3 trilliom from outside the country and Shs 7 trillion, as well as borrowing from within the economy. Government also gets external grants to the tune of Shs 280 bn.

“Why do we have to borrow or beg from outside or even borrow from within? We do so because many people who are supposed to pay tax do not pay the tax,” he stated.

The avoidance or evasion of tax, he says, is captured using the standard measurement used all over the World, the tax to GDP ratio.

In 1991, Uganda’s tax to GDP ratio stood at 4% which rose to 12% after rhe formation of URA, says Museveni. But this, he adds, is still low compared to countries like Europe where this ratio is at 30% and more.

He blamed this on the under declaration of calls by telephone companies, failure to pay rent tax as well as the large section of Ugandans who are engaged in subsistence agriculture but are difficult to tax.

The President also faulted the problem to the absence of scanners on the borders which allows false declarations of goods in containers, and slowness in introducing electronic stamps to the goods imported from outside at the factory level.

On the sticky issue of social media tax which has raised uproar among internet users in the country, Museveni says it is unfair that some Ugandans work hard to produce exports that earn the country foreign revenue only for other Ugandans (social media users) to donate these dollars to foreign companies (social networking sites).

“The social – media users have no right to squander the dollars I earn from my coffee, my milk etc by endlessly donating money to foreign telephone Companies through chatting or even lying and, then, they are allergic to even a modest contribution to their country whose collective wealth they are misusing,” he said.

All the moral reasons are in favour of the tax on accessing social media, he said.

Museveni mentioned that government will only deliberately exempt taxes on items in the wealth and job creating sectors such as agricultural products, machinery for factories or agricultural machinery, raw materials, scholastic materials, medicine, exports among others. 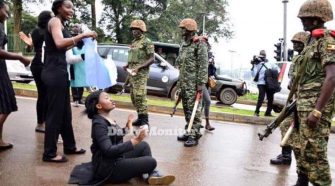 Mak Suspended Students Will Be Allowed to Sit Exams, Management Given 2 Weeks to Conclude Case