President Yoweri Museveni has called on the Police to be more dedicated and patriotic at the execution of their duties in-order to implement their role of ensuring the security of Ugandans and their property.

The President made the appeal Thursday at the commissioning of Phase One of the National Command and Control Centre of the CCTV project at the Police headquarters in Naguru.

“You can have technology but if you don’t have the 2 words – dedication and patriotism – especially patriotism which means loving your country and the people, then you can leave the force,” he said.

He emphasized the need for all Police officers to be more patriotic and regard all Ugandans as a family adding that anybody who does not love Ugandans is an enemy of the people.

“You must look at Uganda and Africa as a family. You must be someone who will not tolerate the harming of families. That is why we went to Mozambique because those people were oppressed”.

“That is also why, we in the National Resistance Army (NRA), were able to do a lot. We looked at Ugandans as our family. Patriotism – fatherland. If you have this in your head, you will not neglect your duty,” he stressed.

President Museveni was happy to note that the cameras have already yielded fruits in helping to identify the criminals who murdered Nagirinya and also the passenger who strangled the boda-boda rider and stole the rider’s motorbike.

He said government is now going to embark on digital identification of vehicles and boda-boda in order to effectively defeat crime.

“When the Sheihks were murdered and others like Kagezi, Kirumira and Abiriga, we were depending on human information. That is why we said No! We must go a bit modern and implement this project. This is just the beginning. We are going to tighten the fight against crime and defeat it,” he said.

He also pointed out that another challenge was lack of linkage between the public and the Police stations. He, therefore, urged the Police to provide the public with numbers they can call once in distress.

He further urged the Police to always be on standby to swiftly respond to such calls by rapidly moving to the scene of the incident.

President Museveni thanked HUAWEI Uganda Safe City Project staff, led by their Director, Yang Tao, for their support in the implementation of the project adding that China is always a good friend of Africa. “We shall continue working with them,” he added.

Sate Minister for Internal Affairs, Hon. Obiga Kania, hoped that the Inspector General of Police (IGP) and staff will put the facility to proper use for effectively defeating and preventing crime.

The Inspector General of Police, John Martins Ochola, noted that the facility will, among other things, be able to help in identifying the location of distress calls as well as in the investigations.

Minister for Security, Gen. Elly Tumwine, Chief of the Defence Forces, Gen. David Muhoozi, Deputy Inspector General of Police, Gen. Muzeeyi Sabiiti and a number of senior security officials, were at the function. 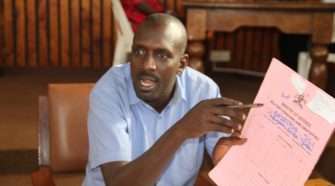