President Yoweri Museveni has lashed out at men who have made it a habit to beat up their spouses, calling them “foolish” and “cowards”.

The President condemned men who engage in acts of domestic violence which he said does not only go against Biblical teachings but also makes them less of men.

“Men who beat women are foolish and cowardly. Religious institutions should speak against this. Ephesians 5:25 says ‘Husbands love your wives just as christ loved the church and gave himself for her’,” Museveni said in his remarks during the Women’s Day celebrations on Thursday.

He said that during his matrimonial years with wife and First Lady, Janet Museveni, he has never beaten her or even pushed her even when they have issues.

“I have been with Janet for close to 50 years but i have never even pushed her, when we have our fights, i just leave her in peace and go somewhere else”.

“Men, stop beating women. We even stopped cattle keepers from hitting cows, what then makes you beat a woman? If you want to fight, look for a fellow man,” he added.

He also challenged women to engage in economic activities in order to eliminate their vulnerability to domestic violence. This, he said will address the issue of economic dependency which has forced many women to keep silent despite harassment.

“Women say they don’t report the men because they’re dependent on the man. Women, get your own property so that you can stop depending on men for everything”.

He said that government has enacted a law that does not allow sale of a matrimonial home without the consent of the woman.

The President also appealed to the MPs, after they have allocated funds in the national budget to critical sectors like infrastructure, security, health, education to allocate more money to the youth, women and micro finance funds because these will enable women create their own wealth. 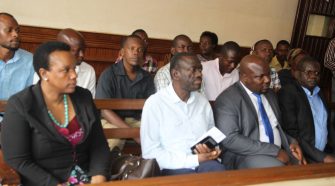