President Yoweri Museveni has Tuesday afternoon condoled with families who lost loved ones to floods and landslides. The President who had just returned Nairobi, Kenya where he attended the African, Caribbean, and Pacific (ACP) Group of States Summit, has also advised Ugandans against settling in wetlands.

These losses, on account of floods and landslides, are, mainly, due to the mistake of insisting on settling (living) in areas that logic and God did not intend for human habitation.

You can have fish ponds on the edges (emiiga) of the swamps but not in the centre of the swamp. In order to expedite the evacuation of threatened People, we may have to look at only cash compensation instead of the protracted process of resettlement which involves the allocation of planned farms, permanent houses, etc. as seen here below in Bulambuli.

With cash, People can, then, go and fend for themselves. The swamps and steep mountains are not for crops and human settlements (amaka). The swamps are for water, ebigugu (cyperus latifolia) and papyrus (cyperus papyrus). Undisturbed swamp water is for irrigation and the swamp grasses are for mulching (okwarira) crops.

The swamp grass also helps in the manufacture of rain through transpiration (sucking water from the wetland and putting it in the atmosphere to make rain). You normally see mist (oruho) along these swamps early in the morning. That is part of that transpiration that, eventually, helps with rain formation.

The swamp grass also filters the water of soil and impurities and, therefore, protects the Lakes from silting filling with soil. Forests and vegetation along steep mountains use their roots to hold the soil and also act as cushion for raindrops (amakaanda) hitting the soil so that rain and the run-off water (omutuunga, omukoka, alele) does not sweep the soil, causing soil erosion and, eventually, landslides. The tree-leaves and canopy also break the force of the raindrops.

The tree-roots and the dropping leaves, also form a soft bed on the forest floor and slows down the speed of mutuunga (run-off water) and forces the water to sink in the soil, thereby replenishing the water-table underground. Instead of water running on the surface and causing destruction, it sinks in the soil.

I will intensify the campaign for the Environment Resettlement fund so that those who were misled by the Government to go to the wetlands in the 1960s are compensated to get out. The recent encroachers should simply get out. Condolences, again. 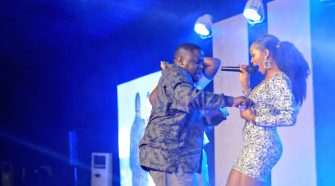