President Yoweri Museveni has castigated people who are undermining the role of the private sector in the development of Uganda labelling them as “ignorant”. He said that the modern world is largely steered by private businesses, criticizing politicians that have faulted him for supporting investors.

“The modern world is about private sector. When you hear that countries like South Korea, Japan and the U.S. are strong, it is because of private companies like Toyota, Hyundai and Samsung,” the President said in a news conference held at State House Entebbe.

He threw his weight behind investors in Uganda whom he said are contributing to job creation and the much needed economic growth.

He expressed disappointment while alluding to a section of MPs who recently condemned him for supporting Madhvani Group in the wake of claims of the Group’s land grabbing in Amuru, Northern Uganda.

While responding to a question on why public land that was given away for private developments has not been utilized many years later, the President noted that failure is part of progress.

“Trying and losing is part of success. If some factories did not work, no problem. We shall keep trying. Perhaps another investor will come and succeed. I attacked Kabamba three times before I succeeded”

He, however, highlighted some of the investors’ projects such as the Pearl of Africa Hotel (formerly Hilton Hotel) in Nakasero and Namanve Business Park among others that have since created employment for Ugandans.

“I get surprised when people and the media start to allege that investors are grabbing land while referring to them as ‘Indian companies’. Uganda’s GDP is the value of all production in our territory by whomever. United States progressed because of contribution of very many people; Africans, Chinese and so many others,” Museveni remarked.

By creating jobs for citizens, paying taxes to the government and contributing to Uganda’s GDP, Museveni said these industries become local businesses. The private sector does a lot of work efficiently and that’s why everybody should support it,” he said.

The interactive presser at which he responded to calls from members of the public is the climax of a wide campaign to sensitize the populace on proposed amendments to the land acquisition law. 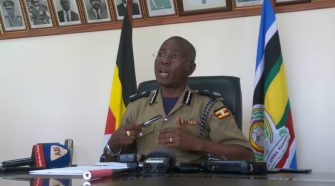