President Yoweri Museveni has on Wednesday, September 11 put to rest the allegations by State Minister for Investment and Privatisation, Evelyn Anite that there are mafias in Uganda government.

The President was responding to a query by a Ugandan, Rogers Kagaba on social media.

While addressing a press conference on August 19, Anite alleged that the so-called mafia were after her life and that she had information they were holding meetings at Uganda Registration Services Bureau (URSB) offices and Kampala Club to kill her over her “push” for the UTL audit.

At the time of the press conference, court had granted an application by Uganda Broadcasting Corporation (UBC) to audit UTL. Anite had in an earlier letter scoffed at the application by UBC saying that the corporation was being used as a pawn. She, however, sought to take credit when court granted UBC’s application and thanked court for heeding her call.

“These mafia are not jokers. Go and ask Abiriga. Ask Ayume. I will die while shouting that the mafia are coming until they take me down. They follow me and they are tapping my phone. You know the mafia, those who have been trying to block the audit”, she said.

“The plan by the mafia is to take Anite out of the picture, I might die but history will judge them. You know the mafia! Don’t live in denial”.

Anite in various tweets also claimed that the whistleblowers’ letters to the Inspector General of Government (IGG) calling for investigations into her discreet travel to Mauritius where a company she fronts to take over UTL is based, was the work of mafia.

However, two days after the press conference, Anite wrote to the IGG admitting travel to Mauritius and insisted the whistleblower’s letters’ calling for investigations into her interest in the Mauritius based company were diversionary. She also posted several tweets saying she would continue to fight the so called mafia as President Museveni had fought other mafia – the “Kawukuumi in some institution” that she did not name.

Now President Museveni has distanced himself from Anite’s utterances saying that those who make claims that there are mafia in government are wrong and panicky.

“There are no mafia in Uganda”, Museveni said.

He however explained that there are corrupt individuals in government who can easily be dealt with.

“There are corrupt and criminal individuals but they are easy to get rid of because the NRM has a lot of power. There is nobody who can criminally challenge the NRM in Uganda”, he said.

He added that whoever alleges that there is mafia in government is free to present evidence to the authorities to take action.

“However, since the NRM is a force of justice, we never go against anybody without evidence. Therefore, those who are just talking of mafia are wrong and panicky.

“Patiently gather evidence, bring it to the authorized people and we shall strike”, Museveni advised.

During a radio talkshow, the Capital Gang, Anite was asked to name the mafia.

“I gave the names to my appointing authority (President Museveni)” – Anite responded and declined to name the mafia on radio. 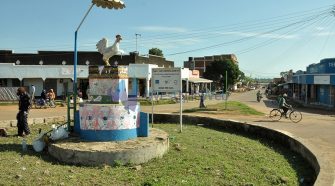