President Yoweri Museveni has expressed displeasure towards Uganda’s low Tax to GDP ratio (at 14.3 percent) in comparison to some African countries whose ratio goes as high as 20. He said this why he had to sack Senior officials at Uganda Revenue Authority (URA) whom he labeled a corrupt crowd.

In March, the URA Commissioner General, Doris Akol was fired by President Museveni and replaced with John Musinguzi.

Their sacking followed repeated criticism by the President towards URA over persistent revenue shortfalls and laxity that resulted into underdeclaration by big multinationals including telecom companies.

Although the URA Board of Directors in their statement had indicated the resignation wasn’t forced, the President has Thursday indicated that the officials were sacked in a bid to rid the tax body of corruption.

The President made the remarks while addressing Parliament during the 2020/2021 Financial Year Budget address.

He noted that the low revenue collections country have been as a result of corrupt officials in the tax body that have enriched themselves other than serving their country.

“There has been a lot of corruption in URA, that one I have cleaned, as we shall clean some of the other places, wherever there is corruption, we shall get there and clean it up.”

The President also asked Parliament to reconsider the decision to exempt rental owners from paying income tax as had been proposed saying their decision amounts to shielding tax evaders.

The next financial year’s revenue target is Shs 21.8 trillion, comprised of tax revenue amounting to Shs 20 trillion and non-tax revenue of Shs 1.5 trillion. This target translates into a revenue effort of 14.3 percent of GDP. 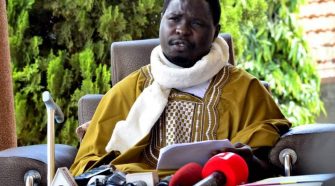