The army has announced a reshuffle among which Maj Gen Nakibus Lakara from Uganda Rapid Deployment Capability Centre (URDCC) has been appointed to AMISOM Force Headquarters as Deputy Force Commander Operations.

The rehuffle which was effected by President Yoweri Museveni, the Commander-in-chief, was confirmed by the UPDF Spokesperson, Brig Richard Karemire.

Maj Gen Fred Ociti Tolit has been transferred from Burundi to South Africa as Defence Advisor.

Brig George Etyang has henceforth been posted to the National Counter Terrorism Centre from South Africa where he has been.

Brig Metland Bitumbika from Chief of Pensions and Gratuity to Military Advisor at Uganda Permanent Mission to UN-New York.

14 hours ago
News in Pictures 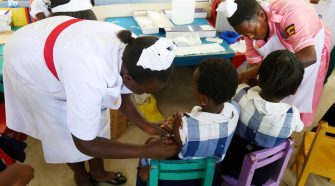 Govt Exceeded its Target by 1.3 Million Children in the Measles Rubella Mass Vaccination