President Yoweri Museveni has given a donation of Shs 30 million to the Yesu Ahuriire, Karama charismatic prayer centre in Mbarara municipality.

The President was on Friday attending this year’s week long prayer conference at Karama in Nyakayojo near Mbarara town.

He also pledged to support the centre to settle their financial debts in addition to providing electricity transformers, ambulances and a public address system that will ease their evangelical work.

In his remarks while he addressed thousands of believers that converged at the conference, Museveni delivered his New Year congratulatory message and lauded the believers’ love for prayer.

“I am always pleased when I find a group of people praying together especially the youth. Christianity helped me to avoid all sorts of bad behaviour,” the President said.

He encouraged the youth to pray constantly for divine guidance and intervention in the challenges that they face.

The event is organized by popular evangelist, Rev. Fr. John Baptist Bashobora who is also the coordinator of the Charismatic Renewal Movement in Mbarara Archdiocese.

This year’s ‘New Dawn’ conference was themed ‘Believe in Jesus Christ, and you and your family will be saved’.

It drew preachers and believers from different parts of Uganda and beyond.

At the same event, Rev Fr Bashobora took time off to lay his hands and pray for the President in a private session.

The President advised the authorities at the prayer centre to consider upgrading the facility to include hostels for worshippers. 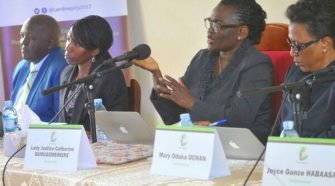