President Yoweri Museveni has held a series of bilateral meetings with several other Heads of State on the sidelines of the ongoing 30th African Union Summit in Addis Ababa, Ethiopia.

The bilateral talks between President Museveni and the five Heads of States centred on strengthening peace and security on the continent.

In a meeting with his Mozambique counterpart, Felipe Jacinto Nyusi, President Museveni extended his gratitude to the Southern African state for its role in ensuring a peaceful transition of power in neighbouring Zimbabwe.

“I am very happy with the contribution you made on Zimbabwe so that there was no havoc,” said Museveni.

He told Mr Nyusi that Ugandans were grateful for the support Mozambique offered the liberation struggles of the 1960s and 70s.

“When you see the Uganda army involved in protection of humanity in the region, the credit goes to people of Mozambique who provided the ground for military training,” he said.

“The Uganda army is built on the background of the first group of 28 people we trained in Mozambique”, President Museveni said, adding that he would soon visit the memorable training sites in Mozambique.

“When we say we commemorate Mozambique, it is because of these fundamental issues,” the President stressed.

On his part, President Nyusi said the political situation in his country was calm after the population rejected the violence of the rebel movement, RENAMO, opting for dialogue.

“We believe by next month we shall have a consensus for the next general elections which is very important,” he said.

Mr Nyusi said his government was working hard to ensure the country’s GDP grows from the current 4.7% to 6%, adding that they were trying to achieve self-sufficiency.

President Nyusi also said his country was playing a critical role in the political stability of Southern Africa region.

“We are happy to see that our political fathers and liberators are being protected,” he said, citing President’s Robert Mugabe and Joachim Chissano.

Museveni also met with South African President, Jacob Zuma with whom he signed an agreement on defence, peace and security cooperation between the two countries.

With Somali President, Museveni discussed issues to do with African Union Mission in Somalia (AMISOM) and regional peace. Uganda’s army has contributed to the peacekeeping troops currently deployed in Somalia to restore stability after years of civil conflict.

Over the weekend, President Museveni addressed the Peace and Security Council Meeting of the AU stressing the need for Africa as a whole to make joint interventions to counter the threat of terrorism.

Museveni rooted for stronger technical capacity and solutions to deal with the issue of ideological disorientation which results into skewed politics and destabilizes security. 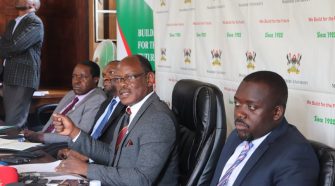