Amama Mbabazi who is also former Secretary General of NRM will attend the NRM National Executive Council (NEC) scheduled for Friday in Entebbe, as a special guest.

This was revealed by Rogers Mulindwa, NRM’s Senior Manager for Information, Communication & Public Relations in a statement on Thursday.

“Article 12(2)P of the NRM Constitution gives the National Chairman the right to invite not more than 5 individuals who have made special contributions to the struggle to attend the NEC meeting,” Mulindwa said.

Melinda says the party “shall be grateful to receive them as our special guests during NEC meeting.”

It is however not clear whether Mbabazi will thereafter attend the party’s National Conference on Saturday January 25 at Mandela National Stadium.

In the last one month, Mbabazi has publicly met President Museveni twice, something that continues to ignite debate in the public on whether the once ‘Super Minister’ is on his way back to the NRM and government.

This week, the duo met in Togo’s capital Lome, where Museveni had gone to attend a two-day France-Africa summit on drug trafficking and counterfeit medicines on the continent.

Mbabazi was one of the officials who were lined up to welcome President Museveni at the Lome- Tokoin Gnassingbe Eyadema International airport, alongside Togo’s president Faure Essozimna Gnassingbe.

Prior to the Lome meeting, President Museveni and Mbabazi had at the end of December met at Museveni’s farm in Kisozi in Gomba district.

Mbabazi contested against President Museveni in the 2016 Presidential race but lost. This was after he fell-out with the NRM where he had intended to contest internally for the party Presidential flag bearer but Museveni was endorsed by NRM as a sole candidate. 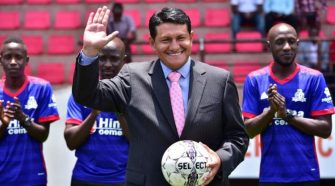