President Yoweri Museveni has revealed that it would be madness to continue and hold next year’s general elections in the event that Coronavirus is still a threat.

He said that general elections involve people gathering in large numbers which is a risk factor in spreading the disease.

Museveni made the remarks during an interview with NBS Television where he noted that he is still optimistic that the general elections shall be held as scheduled.

He said that the country shall go ahead and hold the general elections scheduled 2021 in case the prevailing COVID-19 is contained by June, 2020.

According to the general elections road map, a number of activities have since been affected including the Interest group elections which were taken to take place last month in April.

Some Ugandans including Members of Parliament of the East African Legislative Assembly (EALA) have come out to demand for an extension or suspension of the 2021 general elections.

These have argued that it would be so stressful to hold elections of over Shs900bn when the country’s economy is already hard hit by the prevailing COVID-19.

However, commenting on the issue, the President said that the elections can only go on in case the virus is no more by June or July this year.

“If the virus can stop around June, we can have elections, the issue is with the long campaigns; you see countries like Iran went on with elections when the virus was already around but they suffered, this is very dangerous,” Museveni said.

Asked if the country would postponed the elections if the virus would be still prevailing by July, the President said that this would be the wise option.

“It would be madness to continue with the elections when the virus is a round, it would not be wise,” Museveni said. 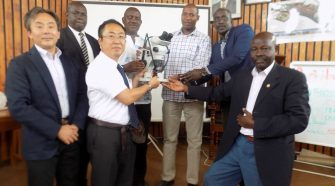