Uganda’s President Yoweri Museveni has maintained he will not discuss the issues pertaining to the frosty relations between Uganda and neighboring Rwanda, in the media.

During an interview with the BBC on Friday, Museveni was asked to comment about the Rwanda – Uganda relations which have been at their worst since February this year.

But the President insisted he will not discuss issues pertaining to Uganda’s relations with neighbouring Rwanda, in the media.

At the end of February this year, Rwanda blocked cargo trucks from accessing Rwanda through Katuna crossing point. Authorities cited construction works and diverted the vehicles to Kagitumba and Kyanika which were also found closed by Ugandan traders then.

President Paul Kagame and Rwanda’s Ministers Richard Sezibera and Olivier Nduhungirehe would later use both social and mainstream media to accuse Uganda of among other things incarcerating and deporting her citizens.

They added subbotage of milk trade, torture, harassment, deportation and incarceration of Rwandan nationals without consular access on the list of their accusations.

The Kampala administration came out and denied the claims saying judicial process had been followed to deport some of Rwandan citizens who engaged in criminal acts. One of the Rwandan DMI agents, Rene Rutagungira is still facing the Ugandan General Court Martial for kidnapping and illegally repatriating Rwandan Refugees back to Rwanda.

Uganda’s Foreign Affairs Minister in a brief to the diplomatic corps this year while responding to allegations raised by Rwanda, said that in as much as Rwandans are welcome to visit Uganda, they are required to abide by the laws of the land.

He said a number of Rwandan security operatives have been entering Uganda without following laid down procedures that govern the entry of security personnel into the country. In such cases, he said, a number of those apprehended have been deported back to Rwanda.

President Museveni would later advise government officials to desist from responding to accusations by their counterparts in Rwanda, saying Uganda will only use diplomatic channels to do so.

As a means of easing tensions, in August Museveni and Kagame signed a Memorandum of Understanding (MoU) in the Angolan capital, Luanda where they agreed to among other things, respect and protect the rights and freedoms of the nationals.

But two months after the MoU, Rwandans traveling by road are still blocked by their authorities from crossing to Uganda.

When the BBC’s Alan Kasuja put the matter to Museveni on Friday, the President said: “What I have said is that I do not want to discuss in the press what I have time to discuss with President Kagame in a confidential meeting.”

Pressed further on the Kigali accusations, the President said: “We were in Luanda, Angola, we signed the communiqué, go and read that communiqué.”

Asked about the time Rwanda, a member of the East African Community, will continue keeping the border closed yet it is frustrating coss-border trade, the head of state said: “You see, the problem is that leaders can not go to solve issues in the papers, I will not do that.”

The Luanda peace pact contained a clause in which both parties agreed to cease hostilities on social media.

However, that was never respected by Rwandan Twitter accounts that continue to spew propaganda against Uganda and its leaders.

The Minister of State for EAC, Olivier Nduhungirehe also recently took to facebook in comments on a random post on facebook to portray Uganda in bad light.

There are several reports of high-profile deaths of Rwandans overseas.

Last month, South Africa issued arrest warrants for two Rwandans accused of assassinating a high -profile Rwandan, Patrick Karegyeya, in Johannesburg. It is not clear whether Rwandan authorities will handover the Rwandans to South Africa for prosecution. 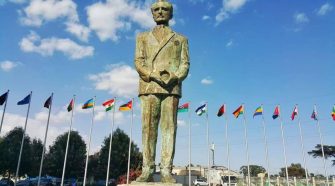