Daily tabloid, ‘Red Pepper’ is set to resume its publication and radio broadcasting any day from now after President Yoweri Museveni gave directives for Police to withdraw from the company headquarters in Namanve.

This follows a meeting between President Yoweri Museveni and directors of Red Pepper in which the President reportedly agreed to end the Police siege on the publication’s premises and to allow Red Pepper and its affiliate media outlets to resume business.

The meeting was held at State House Entebbe on Tuesday night, His Excellency pardoned the Company Directors and its Senior Editors and promised to immediately order the police to vacate the Pepper head office at Namanve and return all confiscated electronic equipment to the company.

State Minister for Housing, Chris Baryomunsi who has been coordinating the negotiations together with Prime Minister Ruhakana Rugunda on the side of government, confirmed the development.

He told SoftPower News that at the meeting that took place at 10pm on Tuesday, the Editors and Directors as Red Pepper presented an apology to the President, pledging not to publish anything considered prejudicial to security.

According to Baryomunsi, the President then directed his legal Assistant to liase with Police and other security agencies to have Red Pepper reopened.

Red Pepper was shutdown two months ago on November 21, 2017, after publishing a story in which Rwanda claimed that President Yoweri Museveni together with his brother Gen Salim Saleh and Security Minister Lt Gen Henry Tunukunde were plotting to overthrow Rwanda’s President Paul Kagame.

A day after publication of the story, seven people including Editors and Directors were arrested and charged with offensive communication, defamation and publishing information prejudicial to national security.

According to a statement by the Red Pepper Management, during the meeting at State House Entebbe, the President warned the Directors and Editors to stop being reckless and become more professional in the course of their reporting.

“The Directors and Senior Editors pledged to the President and the nation, a more transformed and professional publication going forward,” the statement read.

They say that the newspaper will come on the streets very soon. 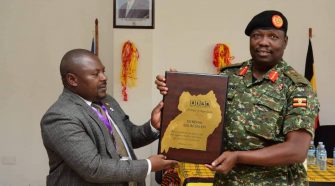