Balunywa’s current three year contract expired this year on May 26.

Just this week, the University Council of MUBS, chaired by Prof. Baryamureeba had appointed Prof. Moses Muhwezi to serve as the interim Principal.

However, SoftPower News has obtained a copy of the letter authored by President Yoweri Museveni directing the Minister of Education to renew the contract of Prof Balunywa whom he praised for among other things presiding over an institution (MUBS) that is not frequented by strikes.

“I am writing to direct you to reappoint Prof Wasswa Balunywa as Principal of MUBS for another term on expiry of this one,” the President wrote in his May 28 letter, two days after the expiry of Balunywa’s term.

Museveni says that a disoriented and pro-imperialism academia is one of the obstacles that have “wasted our time”.

“Prof Balunywa has always been on the liberation side ideology in addition to being an active administrator”.

“His institution has been free of strikes. I have never found him averse to advice the times I have interacted with him,” Museveni further said.

The President added that a person like Balunywa is always good to work with.

Balunywa, 63, a teacher of business and management for three decades now, has been at the helm of MUBS for the last 21 years.

He headed the Nakawa based academic institution since its inception in 1997 as Director, after the institution was formed out of a merger between the former faculty of Commerce at Makerere University and the then National College of Business Studies, Nakawa.

In 1998, Prof. Balunywa briefly resigned his position after misunderstandings with his bosses at Makerere University only to be re-appointed on Museveni’s directive.

He is praised for growing MUBS into a reputable higher institution of learning for business in Uganda. Under his tenure, MUBS has grown from a population of 8,000 students in 1997 when he took over to over 20,000 students currently with campuses in Arua, Mbale, Jinja and Mbarara.

He has continuously advocated through Parliament and the Ministry of Education for the institution which is still a constituent College under Makerere University to be an autonomous university. However, this is yet to be achieved. 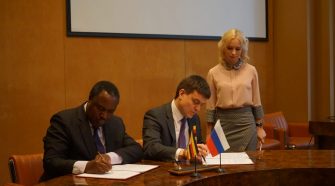 Uganda, Russia Sign Partnership to Cooperate in Science and Innovation