Ugandan President, Yoweri Museveni has made a case for the countries within East Africa to trade more amongst themselves as opposed to “donating” money to Europe and other Western economies.

Museveni was speaking Wednesday on his first day in Kenya where he is on a State visit. The President arrived in Mombasa with a delegation of several Ministers. He and host, President Uhuru Kenyatta later led their delegations in bilateral discussions.

The two leaders addressed a joint news conference at State House Mombasa highlighting some of the issues that characterized their discussions.

While responding to a query from a reporter on the decreasing volume of trade within the EAC, Museveni instead said he was confident trade was growing, especially on the part of Uganda.

“From what I can see, trade is growing or will grow. For example, Uganda exports many things in the region. There are still some issues, that’s why we spent the whole day discussing,” Museveni said.

He revealed that there are still bottlenecks like documentation, slowness at the border, lack of common standards which impede trade.

“Trade is about solving people’s problems – I need clothing, materials for housing, food, where do I buy it? Trade is about the human needs. Do Africans have human needs? Yes. Can they be satisfied by products within the countries or in the region? Yes”.

Museveni said EAC possesses great potential in trade and that the discussions held on Wednesday sought to deliberate on the obstacles and the required interventions. He said regional countries must stop enriching other external countries from which they import.

“The other day, I was looking at the imports of Uganda. USD 800m is spent on importing textiles. You are giving that money to others and yet Uganda produces cotton. Uganda spends USD 130m on importing paper,” he said.

He said it is illogical for a country to earn USD 500m from exports of coffee, then send back USD 800m to import textiles.

The President questioned why Kenya would import products from elsewhere and not Uganda, and vice versa. He alluded to a paper mill at a place called Webuye in Kenya which was operational in the past but has since become defunct.

Museveni said there has been slumber but that “we are in a wake up session now”.

On the issue of the disputed island of Migingo which lies on the border of the two countries, President Kenyatta said the matter had been discussed between Ministers and “they have agreed to put together a formal border Commission to look not just at Migingo but the entire length of the border”.

The Kenyan leader also said during the talks, both sides deliberated on how best Uganda and Kenya can utilize the resources in the lake for mutual benefits. Also, both Principals also greed to create more border crossings between Uganda and Kenya in abid to further facilitate movement of people.

“The more business we do, the better for all of us. Time to move from Mombasa to Uganda even before the Standard Gauge Railway, has been considerably reduced”.

Kenyatta said he is confident the fruitful discussions held on Wednesday will be meaningful in terms of promoting trade, free movement of goods, services and people across borders as well as people to people interactions. 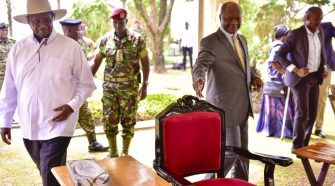