President Yoweri Museveni has allayed fears among the Ugandans over the recent erroneous deductions made on Mobile Money following the implementation of the Excise Duty Amendment Bill, saying that those who lost their money will be refunded.

Parliament in May passed amendments in the Excise Duty law which effective July 1 introduced a 1% levy on all Mobile Money transactions and Shs 200 for all Ugandans accessing social media platforms.

However, days after the new taxes had been implemented, the President clarified that the 1% tax charged on people depositing on their Mobile Money accounts was erroneous and hadn’t been approved.

He also clarified that the levy on other Mobile money transactions was supposed to be 0.5% not 1% as had been passed by Parliament.

The corrections by the President left many Ugandans questioning how an entire government and Parliament could mistakenly slap unapproved taxes on citizens. To date, it remains unclear who misinterpreted the taxes that had been approved by Cabinet.

Amid the contentious debate, others including Members of Parliament asked whether government would refund the chunks of money that had already been deducted, to the Ugandans.

Now, President Museveni has issued a new statement stating that the affected persons will be refunded.

“I signed the law with the error because we could not delay the other measures. However, Parliament, when it reconvenes, will be requested to correct it,” he said in a lengthy statement responding to concerns from Ugandans on social media regarding the taxes.

“The ones whose deductions had been made on the basis of 1% should have their money re-imbursed. Taxing deposits was wrong and it should stop. Re-imbursments will be made,” he said.

In justifying the tax on Mobile Money, Museveni said that many Ugandans continue to conceal their income and that “Mobile money transfers have brought to the surface the big volumes of money that are moving around the country”.

“Each day US$ 52m moves around in the form of mobile money. This is about US$ 19bn a year. Much of this money is by big people; but, of course, some of it is by, economicswise, small people,” he said.

Museveni says that in an effort to have self-sufficiency in budget, Mobile Money transactions are a convenient source we should not over- look.

He however said that a debate is require on what small portion the state can take away to balance its budget without hurting the users.

“Should we only deduct from the sender or also from the receiver? Is it affordable? We should continue to study those questions. However, the necessity of using this for revenue generation is clear. The only question is: “By how much”? Let us discuss this in a disciplined manner,” he said. 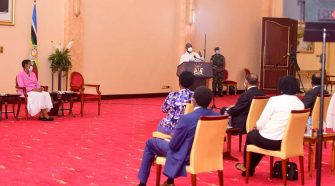