President Museveni has directed Jinja’s RDC Eric Joseph Sakwa to immediately vacate office return only when the allegations against him are fully investigated and disposed of.

On Wednesday, May 20, court stayed the embattled RDC’s interdiction. In the injunction secured by Sakwa, court ordered the Attorney General, Hajji Yunus Kakande and their agents against evicting Sakwa from his office and that he continues executing his duties unhindered.

“Sakwa is accused of being present when a mwananchi was being beaten by LDUs and that Mwananchi later died. I have since got information that this was a frame-up by corrupt people in Jinja that are fighting Sakwa because of his good work,” President Museveni said in a May 20, 2020 response to Presidency Minister, Esther Mbayo.

He added that whereas the allegations may be false, they cannot be taken lightly and should be thoroughly investigated. Sakwa was interdicted following his legal battles regarding the death of a one Sanga Charles, a resident of Lwanda Village in Mafubira Sub county Jinja District, who was allegedly tortured on orders of the RDC.

“A Ugandan dying is very serious. It is in the best interests of Sakwa for facts to come out establishing the truth. Was he at the scene when the mwananchi was being beaten? That would be bad enough even if the mwananchi did not die. Violence by security forces should only be used in self-defence. Even then, it should only be violence to subdue the suspect and arrest but not anything else,” the President said.

The President has directed that Sakwa goes for a two month leave to allow for investigations and establish facts pertaining the said death.

“It is good that Sakwa got bail. Let him go on leave for two months and work with the Director of Public Prosecutions and court to get the facts and conclude the case. This is not a political matter for dialogue. It is a serious criminal allegation. If the accusers of Sakwa are lying, it will boomerang on them,” he added.

Sakwa’s woes started last month when he was arrested on orders of the State House Anti Corruption Unit.

Speaking to this news website, the Kiira Region Police spokesperson said the RDC was arrested on allegations that he, together with other people, tortured one of the residents while enforcing guidelines requiring people to remain home in a bid to fight against the spread of Covid-19.

“He was arrested on allegations that sometime back while enforcing the guidelines against the spread of Covid-19, he and others assaulted a one Charles Isanga and caused several injuries to him. He nursed the wounds and later died,” the Regional Police spokesperson told SoftPower News on Friday.

After the arrest, the trio was thereafter presented to Jinja magistrate court where they were charged with three offences of robbery, manslaughter and malicious damage of property.

It was alleged that on March 22, 2020 at Lwanda village in Jinja District, the trio and others still at large stole shs 80,000, three creates of beer, 8 trays of eggs, sachets of empire drinks and sodas all valued at approximately Shs 429,000, the property of Isanga Charles.

They were also accused of willfully and unlawfully damaging a glass counter, the property of a one Isanga Charles.

Sakwa and his co-accused also allegedly unlawfully caused the death of Isanga Charles between March 22 and April 17, this year.

When the trio was presented to Jinja Magistrate Court, they were remanded to Busesa Prison. Sakwa was later released on bail and interdicted by the Presidency Minister, which was quashed on Wednesday. 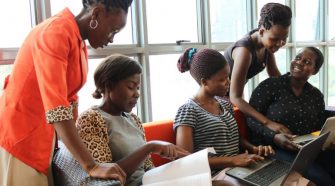 Uganda Ranks Top Globally for Having Most Women Entrepreneurs