President Yoweri Museveveni has reiterated the need for the public to be vigilant by reporting criminal activity or suspicious elements to the Police, so as to reduce the incidence of crime.

The President stressed that Ugandans must exploit the Police call helplines whenever there is a crime that is being committed.

“I have already directed the Police to make available to the public the telephone contacts of the nearest police posts so as to save time,” the President wrote in a statement posed on his Facebook page on Friday.

He was alluding to two incidents of crime – in Najjera where a man identified as Archie Rwengo was murdered and in Naluvule (Hoima Road) where criminals invaded the house of Hajjati Bakari and started beating her and demanding money.

In the case of Bakari, a neighbour rang the Police in Wakiso who ordered the policemen at Ssenge to respond. The Police arrived on the scene as the criminals were still torturing Bakari and attacked the thieves.

One was killed, another one injured and the rest fled, according to the President.

Museveni also cited the case of the gruesome murders in Greater Masaka on New Year’s day 2018 where five people were killed allegedly by Kiddawalime and Galiwango. One of the suspects (Kiddawalime) was killed after a victim rang a crime preventer who in turn alerted the Police and responded.
Hassan Galiwango who had escaped was also later apprehended after a vigilant citizen identified him.

“Let all the Police stations have cost free (toll-free) phones that are known to the public. When that is done everywhere, people being attacked, in addition to the “nduuru” to summon neighbours, somebody should ring that local police number promptly,” the President said.

He ssif that this, in addition to the efforts being made to rid the Police of ‘bean weavils’, will make the Police more efficient.

Museveni urged citizens to make use of their camera equipped phones to take photographs of suspicious people and to quickly ring the Police using those phones in case of need.

“These shallow schemes of criminals, the corrupt Police officers and primitive fascists will be defeated by vigilance, a corruption-free and more responsive Police force and technology,” he said.

For the better part of 2018, Uganda has witnessed a spike in organized crime including kidnaps and assassination of high profile individuals. A few months ago, the President while addressing Parliament outlined ten interventions including the installation of CCTV cameras, that will boost the capacity of security agencies to prevent and solve crime. 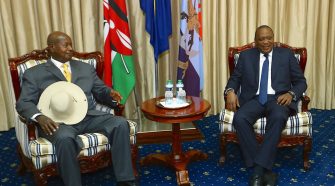