President Yoweri Museveni has come out to defend the decision taken by the late Prime Minister, Apolo Nsibambi to make his daughter, Ruth Nakimuli Kasujja his heiress.

This followed public debate that ensued following the death of the late Nsibambi on May 20, 2019 where a section of the public especially the Ffumbe clan heads (of Buganda kingdom) opposed the decision of making Nakimuli, a female, heiress.

While address the nation during the 2019/2020 National Budget reading at Serena Hotel in Kampala, Museveni said that if the country is to experience the desired economic growth and development, there are several traditional aspects that need to be audited.

“That is what I told the Buganda Lukiiko in my speech of the 2nd August, 1993, when I opened that body. Africa cannot be strong with the traditions that disable her. Therefore, all traditions must be audited with that in mind,” Museveni said.

Museveni advised that the issue be discussed in the context of its legitimacy and the considering the reasons as to why one takes such a decision.

“I saw lawyer Mulira arguing legally about this issue. With me, when dealing with issues, I never start with legality, but with legitimacy. Is it legitimate, is it reasonable, is it rational for girls to inherit their parents’ wealth and responsibilities in some circumstances? In the modern context, the answer is an unequivocal: ‘Yes’,” Museveni said.

The President said it is true that in the past, the Banyankore like other tribes in the region never allowed girls to inherit for very good reasons of that time which range from being exogamous and also patrilineal and were valid.

“Today, however, the considerations are different. The main challenge is to produce modern wealth ─ commercial agriculture, factories, hotel, ICT companies, etc. Is it reasonable for tradition to force a Mulwana or a Nsibambi who, in his life, has built up a string of multi-billion shillings’ business companies to bequeath all this to a lousy nephew because he is a male or to leave the powers of selecting the heir to the clan members some of whom may not have bothered to wake up to the need for modernization?” Museveni wondered.

Museveni said that the way the law is, now, is reasonable, it gives absolute powers to the creator of the wealth to dispose it the way he/she deems fit except for the children who are still minors.

“What Africa lacks is wealth creation on a serious scale and not negative traditions and heirs. The latter two are in plenty. We should not discourage the views of wealth creators by interfering with the Will of the dead. The living wealth creators may, then, say: “Why should I toil if my wealth is going to be messed up by the clan?” Museveni said. 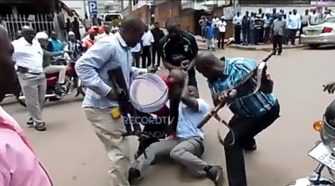