President Yoweri Museveni has met and held talks with Oxfam International Executive Director, Winnie Byanyima on the sidelines of the World Economic Forum (WEF) which is ongoing in Davos, in the eastern Alps region of Switzerland.

WEF is an annual meeting which brings together over 2,500 top business leaders, international political leaders, economists, celebrities and journalists for up to four days, to discuss the most pressing issues facing the world.

Museveni arrived in Switzerland for the forum on Tuesday. On Wednesday, Byanyima paid a courtesy call on him at Hotel Grischa Monta, in Davos.

They further discussed regional integration, promoting peace and security in East Africa and the Horn of Africa.

Byanyima says “We agreed that ordinary people need economic integration and will increasingly push their leaders to build a common market.”

While speaking at the conference, Byanyima emphasised the need for the Africa continental trade zone that has clear social-economic measures of success, instead of volumes of traded goods and services as well as GDP growth figures.

“The Africa Continental Free Trade Agreement is exciting! It’s proof of leadership on our continent to meet the ambition of the SDG’s. But we have to learn from other trade blocks, from globalisation until now. We cannot repeat mistakes from the past,” she said.

Byanyima spoke tough on the increasing rate of economic inequalities as well as gender imbalances in the World, saying it is time action is taken to put a stop on the two, since they are a barrier to economic growth and democracy.

“We must remember that Africa’s economy is largely run as an informal economy, defining women’s work most of all. We need standards, a human rights framework – these must underpin the growth of our common African market,” Byanyima added.

“Extreme inequality is out of control. It’s hurting our economies, undermining democracy, and trapping people in poverty.
I’m here to call for action,” she added.

She said last year alone billionaire wealth increased by $2.5 billion everyday, while the wealth of the bottom half of humanity which is 3.8 billion dropped by $500 million a day, saying this is an indicator that the need to reduce inequality is paramount.

Started in 1971, WEF is impartial and is not tied to any political, partisan, or national interests. The foundation is “committed to improving the State of the World”. 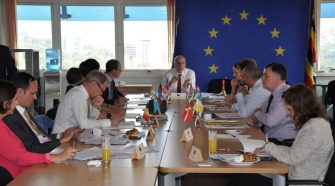