The national address by President Yoweri Museveni on Covid-19 slated for Monday night has again been reinstated to its initial schedule, hours after State House had announced that the address had been called off.

The Head of State was tonight at 8pm meant to address the nation on the country’s way forward as the recent 14-days extension comes to an end.

Senior Presidential Press Secretary, Don Wanyama had Monday afternoon tweeted that the address was rescheduled to Tuesday night. He did not reveal the reason why.

In a fresh announcement, he has now said the address is still on.

“Dear colleagues, after wide consultation, it has been agreed that the 14th Presidential Address on Covid is reinstated to tonight (Monday) at 8pm. Please disregard the earlier notices. We deeply regret all inconveniences. Address will be relayed on all TVs and radios. Tune in,” Wanyama said.

It is expected that Museveni will announce more easing on the restrictions that have so far lasted over a month. The restrictions were part of measures to slow the spread of coronavirus.

Majority of Ugandans are already demanding that the lockdown is lifted given the negative impact it has had on their livelihoods.

Museveni recently announced partial opening of the lockdown in which a number of business entities would be allowed to operate though with restrictions.

He said that during the first phase of opening, some of the business entities that don’t facilitate concentration of people will be allowed to operate.

The President said that food markets will continue to operate as they have been operating but declined to opening up passenger flights.

“Since factories have been operating for this long, they therefore need wholesalers to buy, we shall thus allow them to open but observe the social distance where the seller shall be two metres while the buyer shall be 4 meters away from the shop,” Museveni said.

The hardware shops, garages, metal and wood workshops were also  allowed to operate since they are not a concentration of many people.

The President said that when they thought of other big groups like schools, churches, entertainment centres, sports, bars among others, they found it not fit to have them opened up at the moment.

Museveni has however noted that government has not thought it wise to allow public and private vehicles to operate adding that those that will be allowed to operate will have to hire buses, ride bicycles or walk to work.

Uganda now has 248 confirmed cases of COVID-19 after identifying 21 new cases on Sunday, May 17.

The country currently has 63 recoveries and 185 active cases. 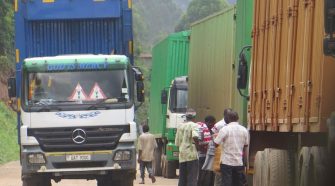