Big names in the music industry have been pouring out their appeals for authorities to free singer and politician, Robert Kyagulanyi (Bobi Wine) who remains in military detention.

Bobi Wine who is also Member of Parliament for Kyadondo East is being held at Makindye military barracks following his arrest in Arua district early this week. The UPDF accuses the singer and self proclaimed ‘Ghetto President’ of possessing a gun which they say was discovered from his hotel room.

But his arrest has especially been overshadowed by human rights violations including torture said to have been perpetrated by personnel attached to the Special Forces Command (SFC).

Family members, lawyers and human rights activists who visited and saw Bobi Wine on Friday said he is in a terrible state. They said he can not walk and that he talks with difficulty.

On Thursday, Uganda’s music star, Jose Chameleone begged President Yoweri Museveni to pardon Bobi Wine for whatever he could have done wrong.

Chameleone who together with Bobi Wine are among the few musicians that pioneered the Afro Pop sound in Uganda asked the President to demonstrate his fatherly attributes.

“As Head of State and forefather, It’s a great one too to lead us in example of forgiveness and reconciliation as that is one of the prime problems that have hindered our society,” Jose Chameleone posted on his Facebook on Thursday.

“With all honour, i beg you the President to symbolize forgiveness in such a time. We can all wrong but better the forgiver,” he added.

Juliana Kanyomozi, one of the most respected female artistes in East Africa prayed for “a sane ending” to the Bobi Wine situation.

“I’m praying and hoping for the sane ending of all this chaos that’s going on,” she wrote on her Facebook page, adding that “I call upon all those who are incharge of our brother’s whereabouts to treat him with dignity and respect his rights that he is entitled to as a Ugandan whatever the circumstances he is facing right now,” she posted.

Juliana appealed for fairness for all in Uganda.

“The Revolution introduced me to art, and in turn art introduced me to the revolution. There is more than one kind of freedom, freedom to & freedom from. In the days of anarchy, it was freedom to. Now you are being given freedom from. Don’t underrate it,” he tweeted using the hashtag #FreeBobiWine which has been topping trends in East Africa for the entire week.

Jaguar, another artiste from Kenya who doubles as MP for Starehe county, pleaded with the President to have Bobi Wine released.

“As a fellow musician representing the people in Parliament, I’m Humbly requesting your Excellency @KagutaMuseveni to please release Hon. @HEBobiwine to assure East Africans of his life and we’ll being. His passion for democracy should not be villified with accusations of treason,” Jaguar said.

Singer A Pass condemned the battering of his colleague by the same security agencies whose role is to protect citizens.

“You promised to serve and protect but you arrested Bobi wine, beat him up very badly, why not put him in prison and take him to court after, where is the law and order in Uganda. And how will you extract information from him in court when he can’t even talk,” the ‘Didadada’ singer wrote.

Weeks ago, A Pass and Bobi Wine were at the fore front of protesting the taxes on Mobile Money transactions and Social Media.

The ‘Gyobela’ hit maker posted a photo with writings “People power, our power. Free Bobi Wine and all political prisoners” on her Twitter.

Sheebah Karungi also wrote in a tweet a message which seems to have been inspired by lyrics from the 2003 hit song ‘Where is the Love’ by Black Eyed Peas.

“People Killing & People Dying. Dear God, Tell Us What The Hell Is Going On. Can’t We All Just Get Along? Please God Help Us. Send Some Guidance From Above. WhereIsTheLove?,” Sheebah said.

“Pray4 Uganda, FreeBobiWine, Free Us, He’s not fighting you, he’s fighting for you,” Sheebah wrote.

On her part, Lydia Jazmine asked Ugandans to push the ‘Free Bobi Wine’ campaign as much as they can in addition to praying for the musician.

“This Is Not Right At All, At All!! Oh Uganda!! Let’s All Post, Comment, Share #FreeBobiWine As Much As Possible. Also Don’t Forget To Say APrayer. This Is ATrying Time For Him, His Family,We The People,This Generation And Our Motherland At Large,” she wrote.

Fille shared a quotation by former U.S President, Abraham Lincoln reading “Those who deny freedom to others deserve it not for themselves“.

Bobi Wine, 36, who leads the Kamwokya based music camp ‘Fire Base’ has had a music career spanning nearly two decades. Beyond entertainment, Bobi Wine has used his music to advocate for good governance, fairness and other social causes while inspiring youth to work towards a better Uganda. 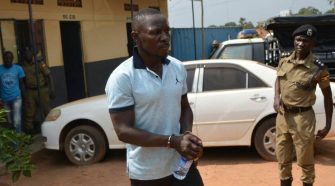 3 Self Confessed Murder Masterminds Out on Police Bond