Joint security teams on Sunday were deployed at the mosque initially under unclear reasons to the public. The security personnel armed with guns and batons cordoned off the area, denying access to the visibly shocked Muslims who couldn’t not tell what was going on.

As such, several Ugandans and online publications took to social media to claim that the security personnel deployed at the mosque were demolishing it.

However, UMSC in a Facebook refuted the allegation, describing it as rumours.

According to UMSC Secretary General, Hajji Ramathan Mugalu, the Muslim leadership is aware of the developments at William Street Masjid.

“UMSC is reposessing this mosque to be under the mgt of UMSC and it is aware of the whole process,” Mugalu said.

Police spokesperson, CP Fred Enanga, told SoftPower News that UMSC has taken over ownership of the mosque and other property and their teams were present to witness the process of handing over.

“We are overseeing the handover of the William Street Mosque and property to the UMSC after it was reclaimed by government,” Enanga told this news website.

He explained that the previous buyers were compensated and their claim over the property relinquished and thus, UMSC takes it over on behalf of the Muslim community in the country.

As such, Mugalu appealed to Muslims to stay calm noting that there was no cause of alarm since UMSC is the rightful owner of Mosque in question.

It should be remembered that the William Street Mosque and its other property, have been a centre of property in the said areas has been a centre of wrangles between Tabliq Muslims based in Nakasero and Uganda Muslim Supreme Council (UMSC) from Old Kampala Mosque who accuse each other of mismanaging rent remittances.

Nakasero Mosque has been blaming the chaos on UMSC accusing them of deviating from the agreement that was reached between the two parties in the presence of President Museveni at State House in 2016.

The President bought back the land title that had been sold to city businessman, Drake Lubega and resolved that the land title was to be in the custodian of Solicitor General, Francis Atwoke and a neutral account be created for rent collections, something that was done and all the rent collection would be deposited on this account.

The agreement was that the money was to be shared after we have reached consensus but Nakasero in January 2018 said they were surprised that the money had instead been deposited on Masjid Noor Muslim Community account that is only accessed by UMSC. 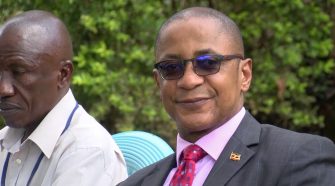