Mbarara University of Science and Technology (MUST) Vice Chancellor, Prof Celestino Obua has been asked by the Ministry of Finance to refund money amounting to Shs 9.7m which he received as part of salary enhancement yet he was not eligible.

This comes after the long-awaited MUST forensic report against the University Vice Chancellor following a petition from staff.

The matters raised in the staff petition included; irregular receipt of salary enhancement arrears of Shs 9,778,986, irregular change of signatories, suffocating the operations of the MUST Grant Office, staff harassment and intimidation, absence from duty among others.

A report dated June 14, 2019, indicates that the Chairman MUST University Council wrote to the Permanent Secretary in the Ministry of Finance who doubles as the Secretary to the Treasury, Keith Muhakanizi requesting for a forensic audit into the allegations of misconduct and mismanagement by the Vice Chancellor Prof Obua.

Consequently, on May 3, the Muhakanizi tasked the Office of the Internal Auditor General (OIAG) to carry out an investigation into the allegations made by the Joint Staff Associations in their petition dated April 4. The petition was to the Chairperson Council.

Among the findings, Prof Obua was asked to refund Shs 9,778,986 as part of the staff salary enhancement arrears for non-teaching staff in February 2019.

“Prof Obua was not eligible to the salary enhancement arrears since he was already earning in the top bar. In fact far higher than the ministry of public service approved salary scale of Shs 11,817,781,” reads part of the report.

On the issue of irregular change of signatories, it was proved that the responsibility lay with the university secretary, Melchior Byaruhanga who is the accounting officer and not the vice-chancellor as alleged by staff.

“The instruction to Standard Chartered Bank for change of signatories was made by the university secretary/accounting officer but not by the vice chancellor as alleged”.

It is upon this background that the National Union of Educational Institution (NUEI) and Mbarara University of Science and Technology Academic Staff Association (MUSTASA) executive members have Monday met at the University Inn to forge a way forward.

It took the executive members three hours to reach a final recommendation.

After the meeting, Julius Taremwa, the general secretary MUSTASA told SoftPower News that the meeting was called to enable them internalize the resolutions reached during the Council sitting on Friday last week.

He accused the Council of trying to usurp the powers of the staff members, adding that the ongoing staff strike will still stand until the general assembly decides otherwise.

“We have decided to call an emergency general assembly on Wednesday so that we can update staff members,” Taremwa said. 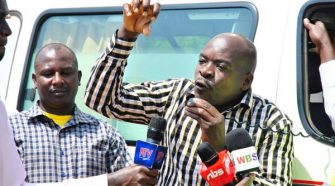 Kitatta, 12 Others Charged by Military Court, Remanded to Kigo Prison