President Yoweri Museveni has said he will retire from Presidency only if his party, National Resistance Movement (NRM) or the Ugandans decides that he retires.

Museveni who has been leading Uganda for three decades and is serving another term after he was re-elected in 2016 has in recent years been facing pressure from his political opposition to retire. In 2016 general elections, President Museveni won in 104 districts out of the total 122 districts in the country while FDC’s Dr. Kizza Besigye won in 18 districts. The opposition, however, claims the 33 years he has been in office are enough for him to hand over.

The issue of succession has been controversial during the Interparty Organization for Dialogue (IPOD) discussions, with some of the members saying it should be top on the agenda.

While responding to queries from the public on his recent social media postings, Museveni commented on responders whom he says were negative.

“Some of the responders were negative. Retire, they shouted at me,” Museveni wrote in his response.

“That will be decided by our Party, the NRM and the People of Uganda”.

Whenever the issue of succession has been raised, Museveni has repeatedly said that is a matter of his party, NRM, which chooses who represents the party on the ballot.

In March this year, the Parliamentary Caucus of the ruling NRM party during a retreat at the National Leadershi Institute, Kyankwanzi, endorsed Museveni for Presidency in the 2021 elections.

The caucus said it is at this juncture that the country needs him most.

“We are at the most critical and delicate juncture in the process of transformation of our country. This cannot be the point to let go our visionary and unifier. We need Mzee now, than before,” read part of the document containing the caucus resolutions.

According to the lawmakers, the president’s wisdom and guidance are still paramount as the country executes a qualitative leap from backwardness to modernity, as well as his firm guidance in “this dawn of the digital, nuclear and space age.”

The NRM MPs resolved to recommend to the membership of the NRM, party’s national leadership organs to support the continuation of leadership of both the state and party up to 2021 and beyond and President Yoweri Museveni.

They said the President’s guidance is needed in mentoring and growing the ideological, political and technical cadreship for “protecting the gains of our revolution as well as secure the future of the Ugandan and African people.”

The decision was synonymous with that of the party’s top organ, the Central Executive Committee (CEC), which resolved that President Yoweri Museveni should be their flag bearer in the 2021 Presidential elections.

CEC resolved to “emphatically recommend to the members of the movement and its organs” that President Yoweri Kaguta Museveni “continues leading the movement and the state in 2021 and beyond.”

Court in June last year, cleared the way for President Yoweri Museveni, 74, to run again for presidency, when it upheld constitutional amendments by Parliament that scrapped presidential age limits in December 2017.

But a Bill removing the age cap was introduced in Parliament in September 2017 and signed into law three months later, sparking demonstrations and outcry from the opposition politicians.

Museveni had in a previous interview said “…I know there are some leaders who have been leading even beyond 75 but I think if you want very active leaders, it is good to have the one below 75.”

In December 2017, Museveni said that Uganda’s political opposition is incapable of offering anything to Ugandans, describing them as “ideologically immature”.

The President took a jab at his political challengers terming them as intolerant, a characteristic he has often used against them.

He accused some of the politicians in the opposition of serving the interests of foreigners.

“This opposition of Uganda is incapable. They are ideologically immature and some work for foreigners. They don’t have anything to offer to the people,” President Museveni told Parliament’s Legal Affairs Committee at State House.

The Committee was interfacing with the President to pick his thoughts on the contentious Age Limit Bill.

He scorned opposition Members of Parliament for exhibiting hostility during the tabling of the Age Limit Bill which was characterized by verbal exchange, commotion and resulted into a brawl in the House.

“The intolerance is because the opposition are ideologically bankrupt and have nothing to offer,” he remarked.

“They are desperate because the NRM government has revamped the economy and generated revenue and we are able to deliver to the population. They now think that the only way to get rid of this government is to do away with particular players,” he noted. 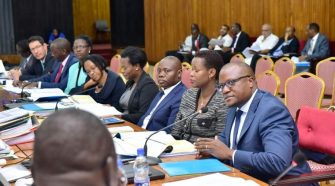