Eight Police officers who were on duty on the night Maria Nagirimya and her driver were kidnapped and later murdered have been charged with neglect of duty by the Police Disciplinary Standby Court.

This followed an internal misconduct investigation by the Professional Standards Unit which also recommended that the officers undergo a disciplinary process.

It is alleged that the officers neglected to promptly and diligently attend to their duty, as on the 28/08/2019 and 29/08/2019 in KMP South, when they failed to immediately respond to a report of a kidnap, which affected the eventual response towards the victims, Maria Nagirinya and Ronald Kitayimbwa.

Nagirinya, a female social worker was kidnapped on the night of August 28 along with her driver, Kitayimbwa, at Nagirinya’s gate in Lungujja Busega Community Zone at around 11pm.

The abductors then drove the two in Nagirinya’s own car to an unknown destination before killing and dumping their bodies in Nakitukuli, Mukono district.

In the days that followed, Police was criticized for negligence given the fact that the abduction was reported in time but no action was taken to save the lives of the two.

While commenting on the incident, President Yoweri Museveni directed that all the Police officers who slept on the job be arrested, tried, sentenced, punished and dismissed from the Police.

“When she was kidnapped, the relatives, immediately, informed the Police of Kibumbiro Police post at Nateete, by about 00:43 hours. The officer there should have informed all the Police units and patrol cars and the camera centres about the type of car that had been hi-jacked, ” the President said in a statement.

“The cameras then would track that vehicle and those criminals would have been arrested or killed before they abandoned the car at Nateete, after dumping the bodies of the victims in Mukono”.

According to the President’s statement, the officer at Kibumbiro Police post in Busega tried to contact the 999 but the 999 was not picking until 00:50 hours.

“The Policemen in the camera centres were asleep, only waking up to “retrieve” pictures from the memory of the cameras. Rubbish. You are not only supposed to retrieve pictures that happened some hours ago. You are supposed to watch live and tell the patrol vehicles to act promptly”.

“All these have been arrested. I have directed that all involved must be tried, sentenced, punished and dismissed from the Police. Moreover, they should never work in any Govt department ever, again”.

Now, Police spokesperson, CP Fred Enanga has said in a statement on Wednesday that an additional officer, D/CPL Kibikwamu Reuben, pleaded not guilty to the charge of Discreditable or Irregular Conduct C/s 44(1), Code 12 of the Police Act, Cap 303.

“It is alleged, he acted in a manner likely to bring discredit to the reputation of the Uganda Police Force and cause injury to public service, when on the 28/08/2019 and 29/08/2019, at Nateete Police Station, he failed to professionally attend to the relatives of Maria Nagirinya and Ronald Kitayimbwa, who had sought his assistance,” the statement reads in part.

All the 8 accused Police officers pleaded not guilty to the charges.

“They are all presumed innocent at this point and court has to either prove or disprove the allegations against them,” Enanga said.

Police says this case clearly demonstrates “how the force is well prepared to robustly address all issues of Professional Misconduct, in order to uphold the highest standards of policing”.

The Police Force has further reminded all its officers are reminded of their duty to uphold the law and display the highest level of professionalism in the course of their duties.

Police says any officer who compromises confidence in the force will always be dealt with appropriately. 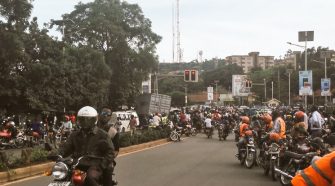