The Member of Parliament (MP) of Bukooli Island in Namayingo district, George Abott Ouma has expressed fear over the disappearance of District Health Officer (DHO), Dr. Patrick Magoola after he tested positive to COVID-19.

The legislator raised the concern before Parliament on Wednesday after learning that the district official went in hiding and sending messages to his friends informing them of his current status.

“Dr. Magoola is appealing to all his colleagues who have come into contact with him to go and test because he tested positive to COVID-19 but what is disturbing is that no one knows where he is hiding,” Ouma said.

Ouma added that the RDC also confirmed having received the messages but tried to call the doctor in vain.

The legislator told Parliament that Dr. Magoola has refused to pick calls which makes it difficult to trace him.

“This is a very big message and everybody is now living under panic, it is my humble appeal that government and other agencies trace for the doctor and find out if indeed he is positive and why he is sending messages from a hide out,” Abott said.

The Speaker of Parliament has directed the Ministry of Information Technology and Communication (ICT) to intervene and help trace the missing doctor.

“I direct the Minister for ICT to establish the whereabouts of that person through the communication system and give us an update next week by Thursday, ” Kadaga ruled. 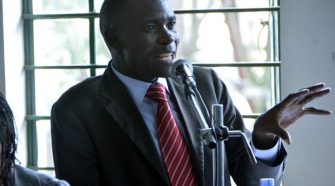