State Minister for ICT, Aidah Nantaba has said the killing of Ronald Ssebulime by Police was at the orders of powerful individuals in high positions, and that it was deliberately done to silence him (Ssebulime).

The Minister who has not appeared in public for months since her alleged assassination attempt in March this year, said on Thursday that whoever was behind her ‘assassination’ “has to be a person so big that even the Police fears to declare this person”.

“We have murderers in high positions that can use whoever they choose to execute their dirt. I imagine someone in high positions using Police to kill because the Police is silent about the person who directed them to kill this person,” she said while on NBS TV Thursday morning.

On the controversial killing of Ronald Ssebulime whom the Minister accused of having been part of the plot to kill her, she said the narrative given by Police regarding the innocence of Ssebulime does not add up.

She says whoever ordered for the killing of Ssebulime did it to silence him.

She maintains the claims that Ssebulime was innocently killed while he was going to visit his children at school is baseless.

“If you have taken the route from Kampala to Kayunga, may be you would know where Kabimbiri, the alleged school is. You would know that this man was killed 50 km away from the school in an opposite direction. That he was heading to Lugazi and the next destination would be Jinja”.

“The Police narrative doesn’t add up with the facts on the ground”.

Nantaba has asked President Museveni to clean up the Police and “to have the courtesy to touch the untouchables”.

“The country is suffering but some people can’t be brought to order. Every time you cross their line, you are looking for bloodshed”

She said the claims made by Presidential Advisor on media, Tamale Mirundi, that President Museveni is surrounded by mafia are true. Nantaba alleges that her tormentors are close to the President.

“I have told him (President) before that he is a prisoner, bad people bring him information, yet the good information is blocked from reaching him” Nantaba said.

However, President Museveni while commenting on these claims recently said there are no mafias in government. He instead asked those making the claims to give proof to back these allegations.

“There are corrupt and criminal individuals but they are easy to get rid of because the NRM has a lot of power. There is nobody who can criminally challenge the NRM in Uganda”, he said.

“However, since the NRM is a force of justice, we never go against anybody without evidence. Therefore, those who are just talking of mafia are wrong and panicky”.

“Patiently gather evidence, bring it to the authorized people and we shall strike”, Museveni advised.

On Thursday, Nantaba disclosed that she has so far survived five assassination attempts on her life. Asked whom she suspects those intending to kill her could be, she cited army Generals.

“I have suspects whom I do know. I have had my battles that exposed me to people who are very well positioned. I could say very dangerously positioned because sometimes when you confront a General, a General who I think shedding blood to him is a game. That’s what I did”.

Asked whether she is at liberty to name the persons behind the plot to eliminate her, she said “I am not at liberty” but added that she has mentioned them to the President.

“Service is dedication, it is selfless and it is where you expect to face challenges”.

Nantaba, formerly a State Minister for Land, claims one of such challenges was her fight against land grabbing and that the threats to her life are connected to the stance she took against individuals who were attempting to steal land in her constituency.

“By the way I’m still blocking three Generals in Kayunga who still want our land. I’m blocking them from evicting thousands of people,” she said.

Regarding recent allegations that Minister Nantaba had sought asylum in Canada, she admitted to having traveled to Canada but clarified that her trip was official, to carry out government duties. 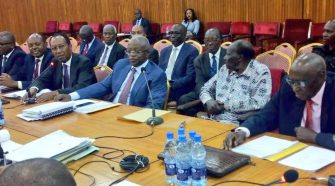