Following claims by the family of deceased social worker, Maria Nagirinya, that Police failed to protect and rescue their daughter from the hands of the killers, the security agency has come out to state that the conduct of the officers involved is being investigated.

Nagirinya and her driver, Kitayimbwa Ronald were kidnapped last week on Wednesday at 11:50pm while approaching her gate by kidnappers who drove them in her car to an unknown destination before killing and dumping their lifeless bodies in Nama sub-county in Mukono district. Bodies were discovered on Friday.

During her burial over the weekend, Nagirinya’s Uncle, Ben Mukwaya, expressed dissatisfaction towards the Police’s response in rescuing her daughter at the time the incident was reported.

Police said after the incident, one Nagirinya’s friends, Kalembe Grace rushed and reported the incident at Katwe Police Station at around a half past midnight. As such, the public and family have been questioning why Police didn’t swiftly respond and pursue the kidnappers and also inform officers monitoring the CCTV cameras to follow them up.

“I saw the level of incompetence, detachment, lack of empathy, lack of professionalism in the way the security agencies were handling the issues of Maria. We shall not rest until we get justice, Maria is not Suzan Magara or Muhammad Kirumira,” he said.

“We will ensure that all those officers who will be found to be complacent are punished for gross negligence,” Enanga said.

His remarks were emphasized by Kasingye who represented the Inspector General of Police. Kasingye said officers who ignore concerns of the public have no place in the Police Force.

“It is our duty to protect life and property and for any member of the public to go to the police station and report a case and officer does not take it seriously, then that officer has no place in the Police”.

“That is why the Commandant of the PSU with his officers have already taken up this matter so that we have internal mechanisms to make sure that people who do not respond to incidents in time and coordinate with others are internally handled,” AIGP Kasingye said.

“Our officers will definitely have to go through investigations using our internal mechanisms and give them a fair hearing. There is no question about it, but the message must be clear to every officer in the country that those who are not found on duty when they are supposed to be should stop,” he said.

He added that he and other officers within the Police receive several calls from the public that cases have been reported but with no help.

“We are hear to emphasise that we are going to have an internal communication to all of them and so we want the public know, should you call any of our officers or should you go to any police station and you do not find Police officers on duty, let us know,” he added.

Kasingye wondered why some officers deliberately switch off their official Police numbers known to the public.

He said these numbers are paid for by the taxpayer, but that management has come to realise that some of the officers switch off their phones.

“For the official line of our commanders and officers in the field to be off is going to be a concern and they must explain,” said the Police Chief Political Commissar.

On his part, Director Information Communication and Technology, Felix Baryamwisaki said Police has now plans to install cameras at different Police stations in the country as one of the ways of monitoring activities of Police officers regard to their response towards complaints by members of the public.

“We now plan to put cameras at the counters such if someone comes with his issue to be handled, we are able to see how the officer responded. Some of these officers say ‘we did our part’ but if cameras are there, we can replay and see, when someone came did you listen to him, did you act in a professional manner, were you able to receive the complainant and hand it with care”.

“Since we have registered a lot of success in using the CCTV cameras in the country, let us not only look outside, we can as well use them to supervise ourselves,” he said. 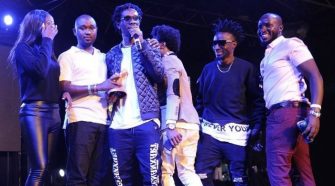