Speaking to the press moments after his win, Mr Kazibwe pledged to reach out to Mr Abubaker Lubowa to work and revive UJA together, saying that he (Lubowa) has brilliant ideas.

“UJA is for us all and key in my first days, is to foster reconciliation of the two camps and harmonise a formidable working relationship within members of the fourth estate,” Mr Kazibwe said.

He in a related way commended Mr Lubowa’s supporters for exhibiting maturity and tolerance during the exercise, adding that it is time to put aside the political differences and strategize on the next line of action as a team of professionals.

The investigative journalist further applauded his supporters for making the right decision and promised to uphold his manifesto and tirelessly work towards achieving what is contained therein.

Asked on the significance of his victory, Mr Kazibwe, a highly experienced Journalist, said that it is not him who had won, but the entire media fraternity and that it is now time for him to embark on reviving the association and restore the seemingly lost media glory and pride in Uganda.

“Of course, I am pleased to have been entrusted with this responsibility but, it is not about me. It is about what I stand for. UJA has for long been literally dysfunctional, which has deterred hundreds of media practitioners from identifying with it, this what I have come to address”, Kazibwe explained.

His campaigns have largely been enshrined on among others, uniting practising Journalists in the country, defending and upholding media rights, improving on Journalists’ standards of living and further training of Journalists.

Kazibwe assumes office henceforth and replaces Mr Robert Kagoro, who has served at the helm of Association for two consecutive terms.

Mr Abubaker Lubowa has already highlighted that he was won with a slight margin, and promised to issue a statement soon.

“Thank you all for the support. It was a tough battle. A margin of 9 votes. Thank you Allah. We are to release a statement soon,” Mr Abubaker posted on his social media account.

The other executive committee members include Mercy Lugemwa from UBC who defeated Dembe FM’s Isaac Katende aka Kasuku and Bukedde TV’s Mathias Rukundo, to triumph as the association’s Vice Chairperson. 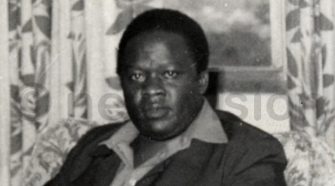 Govt to Coordinate Funeral of Obote Minister, Peter Otai who Died in Exile