Kamokya-based NBS Television has Monday apologized for misinforming the public on the side effects of the Measles-Rubella and Polio vaccine that was recently administered to children countrywide.

The national Measles-Rubella and Polio immunisation campaign was launched in Mayuge District on October 15 and implemented countrywide from October 16 to 20. There was an extension of ons day nationwide and 2 days specifically for Kampala, Wakiso, Mukono and districts in the Karamoja region.

The Ministry reported that 7,955,597 children were vaccinated against Polio out of the 8,200,000 target representing 97% becoming the first and largest vaccination campaign in the history of Uganda.

But days later, three cases adverse immunization reactions all from the same family immunized at a community vaccination post located in Kalagi Mukono district were reported.

One of them would later pass on at the pediatric unit in Mulago National Referral Hospital after being diagnosed with Stevenson Johnson syndrome, a severe skin and mucus membrane disorder that normally occurs as a reaction to medication or an infection.

The deceased and his siblings were hospitalized at Mulago after they presented symptoms of a skin rush around the head area and red eyes. The skin rush later spread to the back and other parts of the body.

The parents and some sections of Ugandans attributed the death to this particular vaccine. This prompted the Minister of Health, Jane Ruth Acheng, to address the media on the matter where she noted that reactions to immunization are expected.

“During immunization, a number of reactions are expected. But none of these should last for a long time. And that is why we have dismissed other reports and are focusing on the three cases that have lasted for a long time,” Aceng noted.

She added that the Ministry had sent samples of the three children to the Uganda Virus Research Institute and the Center for Disease Control to ascertain the cause of the reactions in the children.

However, in a social media post, NBS Television wrote: “The Ministry of health has confirmed dangers posed by Measles, Rubella and Polio Vaccines. The health minister Jane Ruth Acheng has raised fears of fatal side effects on victims during an emergency press conference. The ministry says it is now following up on reports of death and other side effects reported from the exercise.”

In response to the post, the Minister described the post as false information aimed at confusing Ugandans.

“It’s a shame that someone purporting to be NBS TV is coming out at night to confuse the population by posting false information and associating it to a statement I made today to update the public on final results of the MR (Measles Rubella) campaign,” read the Minister’s tweet.

In a statement issued Monday, NBS Television has admitted that they misrepresented facts in the said report, blaming it on the carelessness on the side of their reporter.

“The Management of NBS Television sincerely regret the worry and panic that may have been caused by the misrepresentation of facts regarding the recently concluded Measles-Rubella and Polio Vaccination campaign as was reported in our 9 O’clock news bulletin (LiveAt9) on Friday 15 November, 2019. We extend our apologies to parents, Minister of Health, Ministry of Health, Government of Uganda and the general public,” reads NBS’ statement in parts.

“We condemn the carelessness exhibited in the referred to report and have since put in place further measures to help mitigate and/or ensure this does not happen again,” adds NBS.

According to the Ministry of Health, MR vaccines, like any other pharmaceutical products, have some side effects. However, they do not affect everybody and often are minor and temporary. The common minor side effects include; soreness, redness, or rash at the injection site, fever or swelling of the glands in the cheeks or neck.

The benefits of vaccination outweigh the risk of non-vaccination, especially at the population level, says the health ministry. 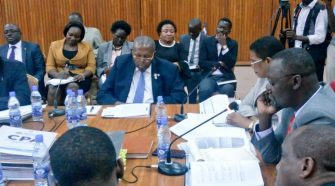