NBS Television has sacked a news producer and suspended a news reporter for their role when the controversial story that misrepresented facts about the Measles – Rubella vaccine side effects was broadcast.

The Next Media Services executive held a meeting Monday morning and took a decision to terminate the contract of Moses Alsayed Lubega who was news producer the night the story aired in the news bulletin.

The termination, the statement adds, follows Lubega’s role as news producer on duty “when facts were misrepresented in a report on a press conference about the recently-concluded Measles-Rubella & Polio vaccination campaign”.

In a related disciplinary action, a news reporter, Stephen Olweny, who reported this new story has been suspended from duty for two months.

“Warning letters have also been handed out to other employees that were involved in the same process,” Next Media Services added..

Next Media Services says it stands for “accurate, relevant and timely content at all times, and we are guided by our professionally-approved Editorial Policy”.

The broadcaster urged its staff to always make effort to internalize these guidelines as they go about their duties.

This after NBS Television issued a statement apologizing for the misreporting, blaming it on the carelessness on the side of their reporter.

“The Management of NBS Television sincerely regret the worry and panic that may have been caused by the misrepresentation of facts regarding the recently concluded Measles-Rubella and Polio Vaccination campaign as was reported in our 9 O’clock news bulletin (LiveAt9) on Friday 15 November, 2019. We extend our apologies to parents, Minister of Health, Ministry of Health, Government of Uganda and the general public,” reads NBS’ statement in parts.

“We condemn the carelessness exhibited in the referred to report and have since put in place further measures to help mitigate and/or ensure this does not happen again,” adds NBS.

She added that 7,955,597 children were vaccinated against Polio out of the 8,200,000 target representing 97% becoming the first and largest vaccination campaign in the history of Uganda.

Dr Aceng further clarified that reports about deaths of children reportedly due to vaccination, saying the Ministry was conducting a probe. She however acknowledged that the vaccine like any other medicine has side effects depending on the individual body systems.

“During immunization, a number of reactions are expected. But none of these should last for a long time. And that is why we have dismissed other reports and are focusing on the three cases that have lasted for a long time,” Aceng noted.

She added that the Ministry had sent samples of the three children to the Uganda Virus Research Institute and the Center for Disease Control to ascertain the cause of the reactions in the children.

However, in a social media post, NBS Television wrote: “The Ministry of health has confirmed dangers posed by Measles, Rubella and Polio Vaccines. The health minister Jane Ruth Acheng has raised fears of fatal side effects on victims during an emergency press conference. The ministry says it is now following up on reports of death and other side effects reported from the exercise.”

In response to the post, the Minister described the post as false information aimed at confusing Ugandans. 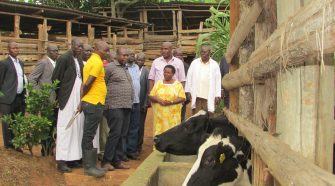