Kasumba who anchors several bulletins and hosts some shows on the Kamwokya based NBS television was arrested on his way back home from anchoring the 9pm news on Monday, according to a statement by NBS television on social media.

The station says he is currently detained at Kiira Road Police Station.

“Our news anchor and show host Samson Kasumba was last night arrested and is being detained at Kiira Road Police Station,” reads the statement by NBS television.

“Samson was arrested on his way home shortly after the NBS LiveAt9 bulletin (evening bulletin). We are doing our best to engage all relevant stakeholders as the cause of his arrest is unknown,” adds NBS.

However, Police Spokesperson Fred Enanga told this news site that Kasumba was arrested over subversive activities and confirmed that he is being held at Kiira Police station.

Asked what subversive activities Kasumba was involved in, the police spokesperson he could not divulge more information at this time.

Police spox Fred Enanga says Samson Kasumba’s arrest is not in anyway connected to his journalistic work, but he’s being investigated together with others for alleged ‘subversive activities.’ He adds that detectives from Electoral & Political offenses dep’t are interrogating him. 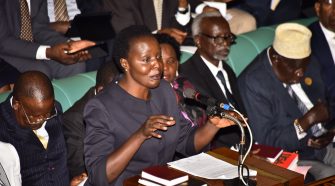